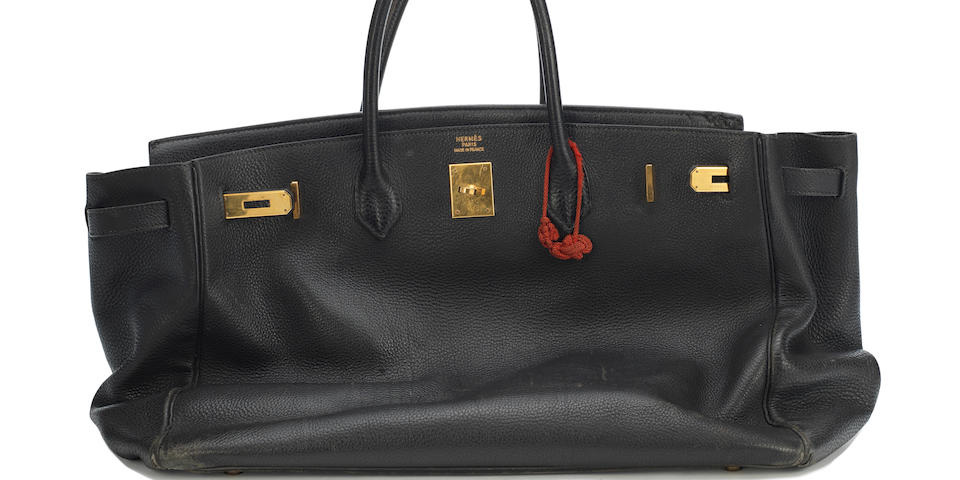 I’m SO excited to share this post for you! But a few weeks ago a VERY rare Jane Birkin owned Hermes Birkin bag sold via Bonham Auction House and it sold for an incredible price!!! I am so excited to share with this with you and some other insights into buying Hermes bags at auction as well as Jane Birkin and her personal handbags! Let’s go!

Above you can see the Jane Birkin Hermes Birkin which was sold at auction a few weeks ago via Bonhams. This bag was sold by a private seller and it had an estimate of around £30,000 as the sale price. As soon as I saw this bag was listed in the auction I was SO excited to see how it sold as Birkin bags owned by the legendary Jane Birkin don’t come up for sale often and I was SO curious to see how it would sell! Of course it went wild, but I don’t know if anyone expected it to sell for the price it did… £119,000 including buyer premiums! WOW! That’s right! This 1999 Hermes Birkin in black Togo leather in the classic 35 size sold for £119,000. AMAZING! I know it sounds like a lot and it is a lot, but these bags are an investment, and is there any better Birkin than one which was owned and well-used and loved by Jane Birkin herself? I think not!

The Hermes Birkin bag is the worlds’ most desirable and coveted handbag. This isn’t my opinion, it’s a fact. It was designed by the head of Hermès in 1984, during a chance meeting with Jane Birkin on an Air France flight. Jane told her she had never found the perfect handbag and together they sketched on out on the flight and the rest is history. Since that time thousands of these bags have been made in all sizes and colours, and even custom versions, and they remain the most exclusive and sought after bags in the world!

The bag was one of five given to Birkin by Hermès since 1984, all of which she has sold to raise funds for charities. This particular bag was initially donated to a charity auction in 2014 to raise funds for Anno’s Africa, a charity set up in honour of Birkin’s poet nephew, Anno Birkin, who died just before his 21st birthday in a car crash. Jane Birkin is known for her extensive charitable work and generous donations.

This bag was accompanied by a letter from Jane Birkin and was signed by her in Tipp-Ex on the interior. It was further personalised by Birkin with a red cord tied around the handle and bite marks from her cat on the handle. Whenever a Jane Birkin owned Birkin bag comes up for sale, it’s often very well used as she tends to use her bags for a long time and use them hard. It makes them more special!!

Yes, rumour has it Jane Birkin was originally gifted the first ever Birkin bag in exchange for them using her name and the design they created for her. She is not an ambassador for the brand, nor a model or a spokesperson, however they do gift her bags, five in total and they give her an annual fee for the use of her name, which is donated to charity. Many of the bags have also been donated to charity too.

Does Jane Birkin have a Birkin?

Yes, In total Jane Birkin has owned five Hermes Birkin bags, however, she does tend to use them and then donate them to charity. It appears that she always has one in her collection and then occasionally refreshes them with a new and gifted Birkin, giving the old Birkin to charity.

How much is a Birkin bag?

The Hermes Birkin bags vary massively in price. If you are willing to buy a preloved Birkin which is old and well worn, you can pick them up at therealreal.com for around $7,000, however, you can usually expect to pay around $10,000-20,000 for a better condition Birkin, again on the preloved market. However, they can go up to around $50,000 for an exotic skin Birkin, and over $100,000 for a very rare and special Birkin like a custom Birkin or a Jane Birkin owned Birkin.

What is the most expensive bag in the world 2021?

The most expensive Bag in the world was designed by Italian luxury handbag designer Maison Boarini Milanese. It was launched in November 2020 and is a turquoise alligator skin handbag with diamond and sapphire encrusted butterflies on it. HOWEVER, the most expensive bag which hasn’t had it’s price inflated with oodles of diamonds is the Hermes Kelly Rose Gold which is valued at $2,000,000 and the Hermes Birkin Bag by Gin Tanaka, valued at $1,400,000.

Personally, I would liken it to the Maison Boarini Milanese bag to the Damien Hirst skull, would it be worth that price ($100,000,000) if it wasn’t encrusted with diamonds?! The materials alone have a scrap value of millions. Arguably, the Hermes Kelly and Birkin bags are the most expensive in the world.

What Are the best selling products from Hermes?

Thank you for reading my Jane Birkin Hermes Bag Sells At Bonhams Auction House! It Sold For…. post. I hope it was of interest to you! I love shopping for designer bags at Bonhams and I promise, they are not usually sold for this much!! Look out for their next sale and if you want to read about some of my Chanel bags bought at Bonhams, read this post!