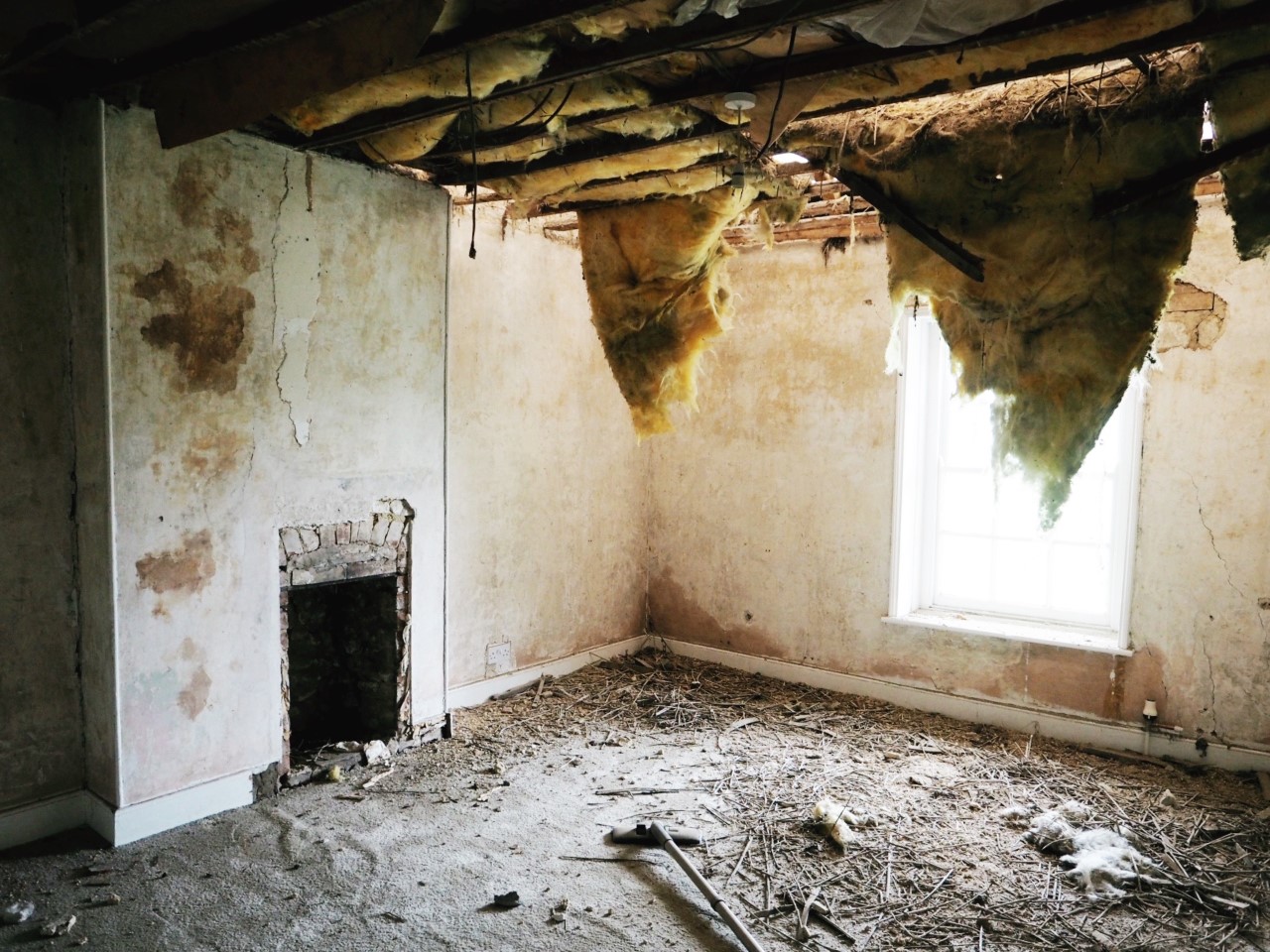 We always knew we needed to do some work on the roof, as there was some damage to the chimney stacks and the front section of the room needed re-felting, however, by the time we factored in the age of the old roof tiles and the cost of scaffolding, we decided to go wild and just re-roof the whole thing. We could have just re-felted the front part and then done a re-roof in a few years, but whilst they are up there, let’s just do it all! PLUS we are hoping our planning permission application will be accepted and we will be able to add in two dormer windows which will be stunners! I’m really excited! There is scaffolding around the entire house and the men have spent the last few days taking off the old tiles and as I’m writing this, the new tiles are going down! In terms of cost, I’m going to be honest, it’s not a cheap project, the reroof is around £25,000 and the two dormers will be an extra £10,000 on top of that. But y’know, once it’s done it’s done! Oh and because there is a little life left in our old tiles, the roofing company are buying them of us for 25p per tile to use as salvage for listed properties which HAVE to use reclaimed rather than new roof tiles. The 25p per tile won’t make much of a dent on the price, but I’m honestly just happy they won’t go to landfill quite yet! Oh and the reason we are doing the roof first, is because with renovations you want to sort the structure first and work from the top down! 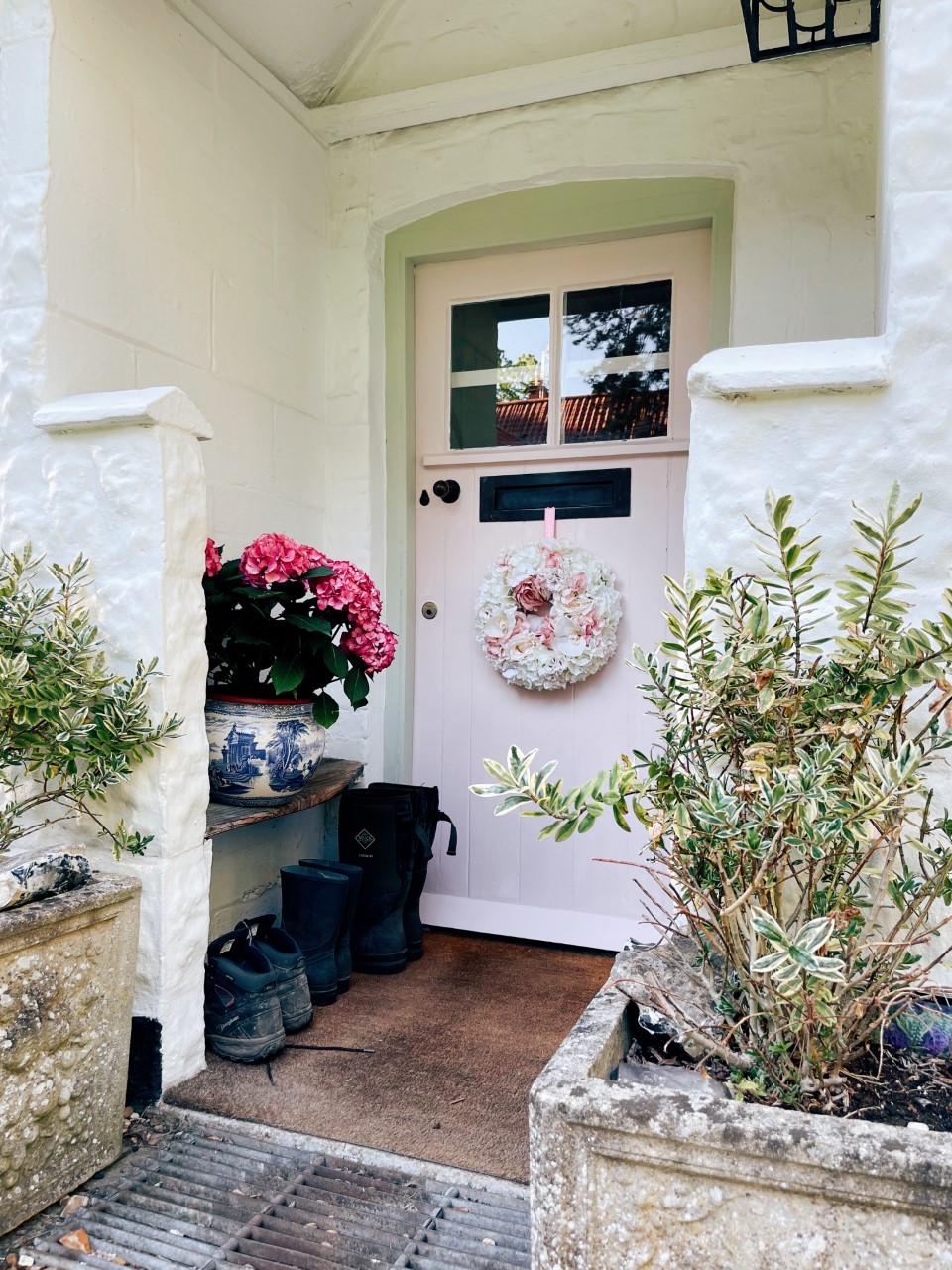 I Painted The Porch Door

This was just a little project, but I spent a sunny afternoon painting the porch door pale pink with a pale green trim. I used Lick Paint which I thought was really nice paint and it looks super cute!! (paint was gifted)

The Ceilings Are DOWN!

We have the ceilings down in two of the bedrooms now which is super cool, the rooms look like a REAL mess, so it’s well worth watching the video just to see the current state. But basically, the timber rafters were needing replacing, as well as the insulation and the ceiling was baggy in places from old leaks. The house is 250 years old, so it’s nothing to be concerned about, but it’s sometimes just good to rip down ceilings and start again, rather than overboarding and plastering on top, as that adds so much weight to the house and generally isn’t the best way to do things. FYI, it would be cheaper to overboard and plaster, but it’s not the best solution long term! Anyway, watch the video!

We have a wonderful new gardener who has trimmed the hedges, sorted out the flower beds (well, except the ones under the scaffolding) and generally worked a little magic in the garden and I’m loving it! The peonies are in bloom, the roses are stunner and the apple trees are looking lovely! It’s such a treat! We also bought a sit down lawn mower as we figured a push along one would be far too time consuming every other week and a sit down one would be way more fun. Full disclosure here, it was expensive (£3,000), but I think long term it will pay for itself and save a lot of time. Plus it’s really fun!

I think that’s it! I hope you enjoyed my home renovation update and if you have any questions, please do let me know!