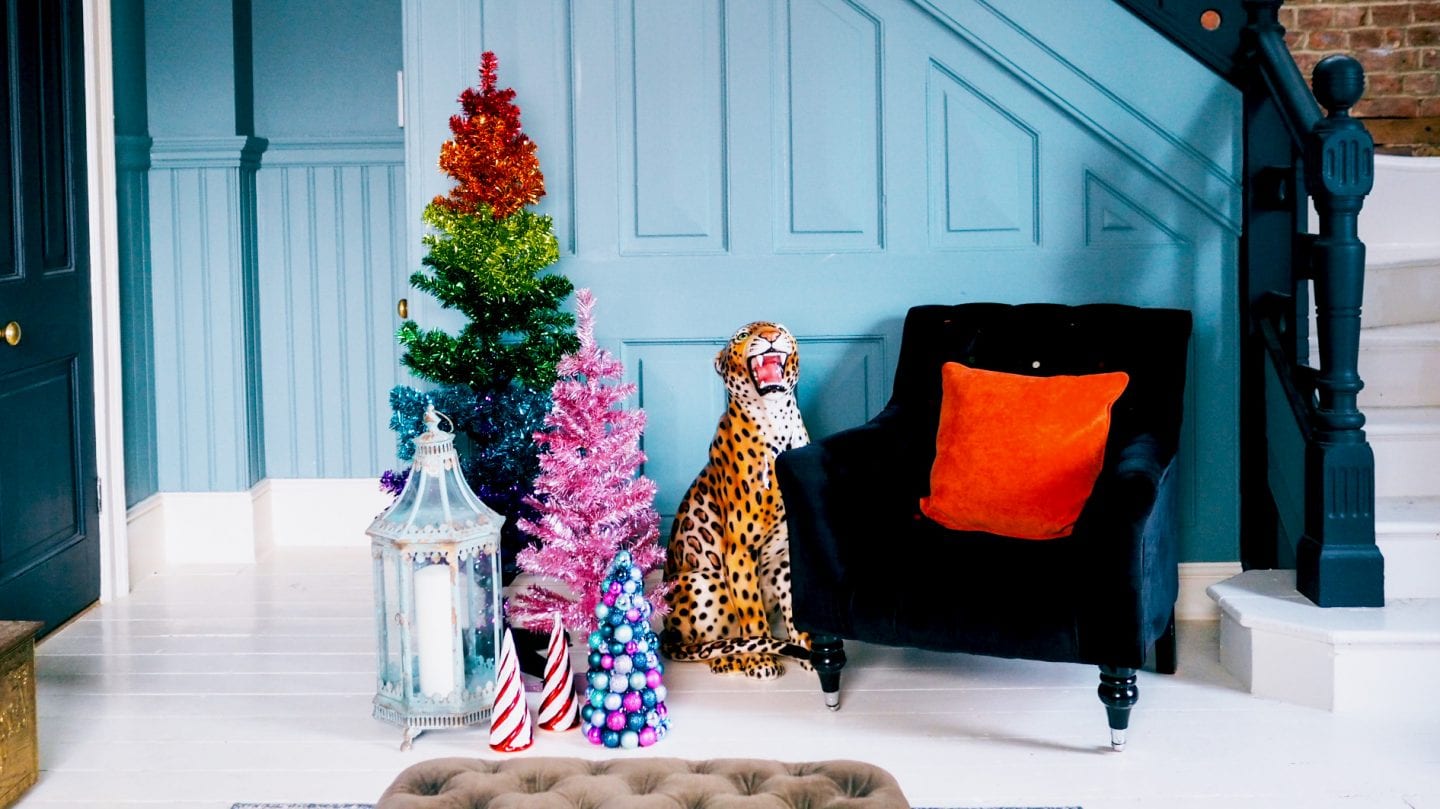 “Honey! I Decorated The House!”

Earlier this week, my boyfriend got up, got dressed and went into London for a day of meetings. Just before he headed out the door I said ‘Can you help me move the sofa?’, he looked at me a little strangely and helped me move the sofa. I wasn’t sure if he was looking at my strangely because I was asking him to move a sofa at 8am, or if I was wearing a towel a the time and I moved said sofa, still wearing nothing but a towel. But bless him, he helped move the sofa, asked no questions and then he headed out to work. Then… I got busy! 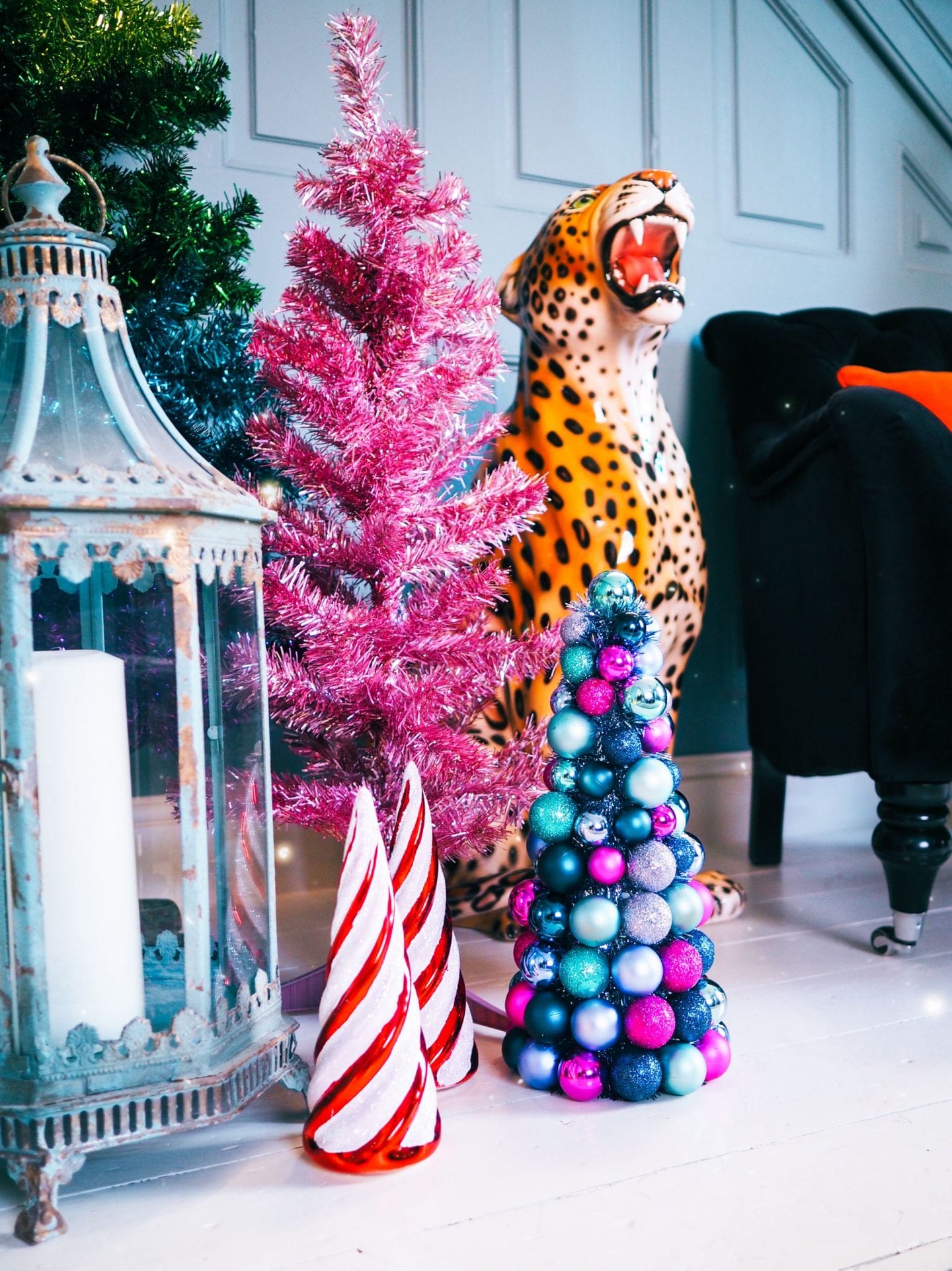 OK, I need to be honest here; I got total Christmas Instagram FOMO! I was seeing all these amazing Christmas trees pop up on instagram and I WANTED IN!! I too wanted to decorate my home with fairy lights, sparkles, foliage (fake or real, I wasn’t fussy!) and whatever else I could find. So I dragged my butt up to the loft (not in a towel, I promise!) and gathered together as much sparkly shiz as I could find and started assembling it all together. I was also kindly gifted a few Christmas decorations from my friends at Matalan a few weeks earlier and I popped them into the mix too! I didn’t really have a vision or any kind of idea of what I was trying to achieve, but somehow, it all kinda came together and I think it looks pretty cute!! 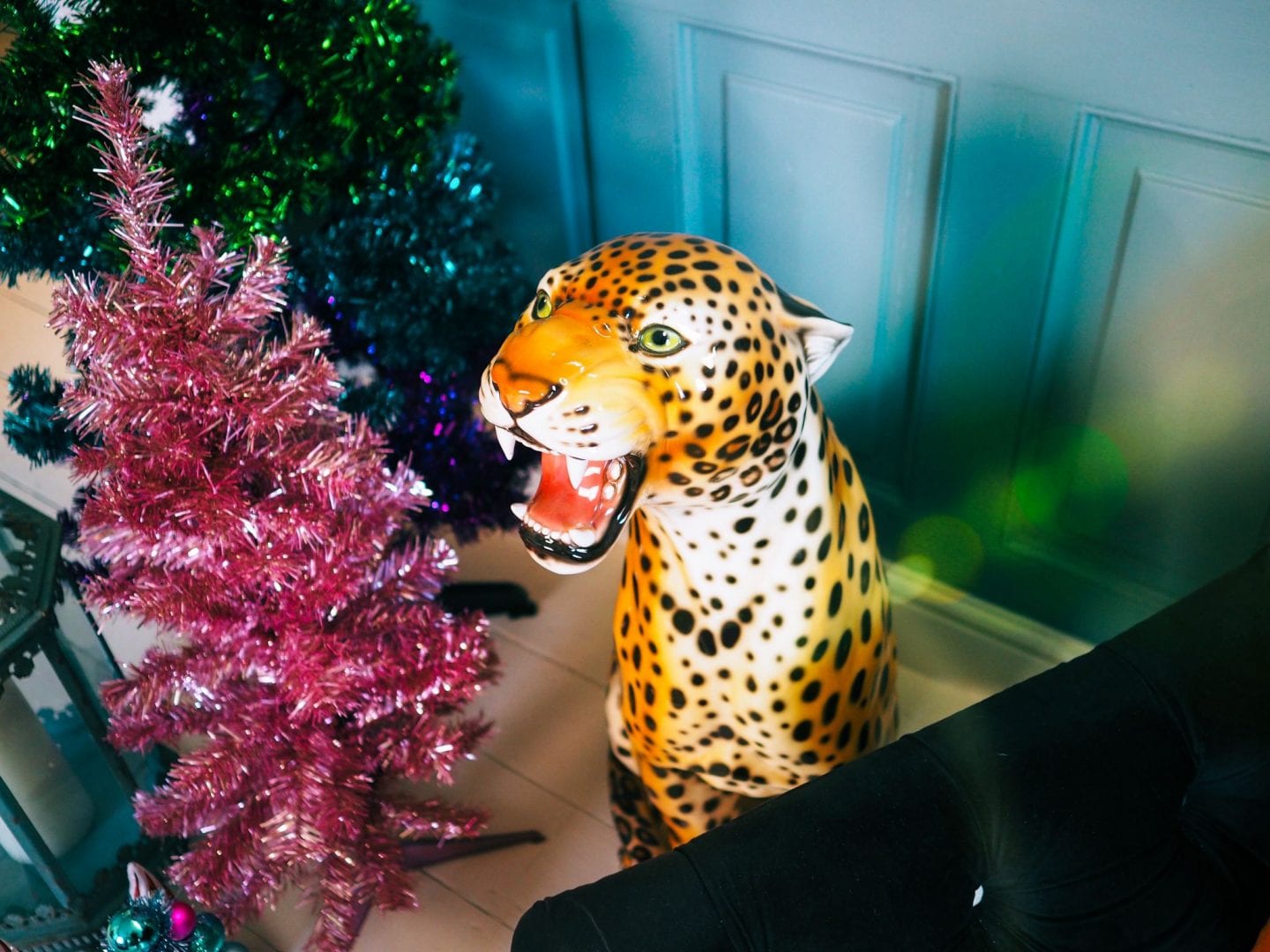 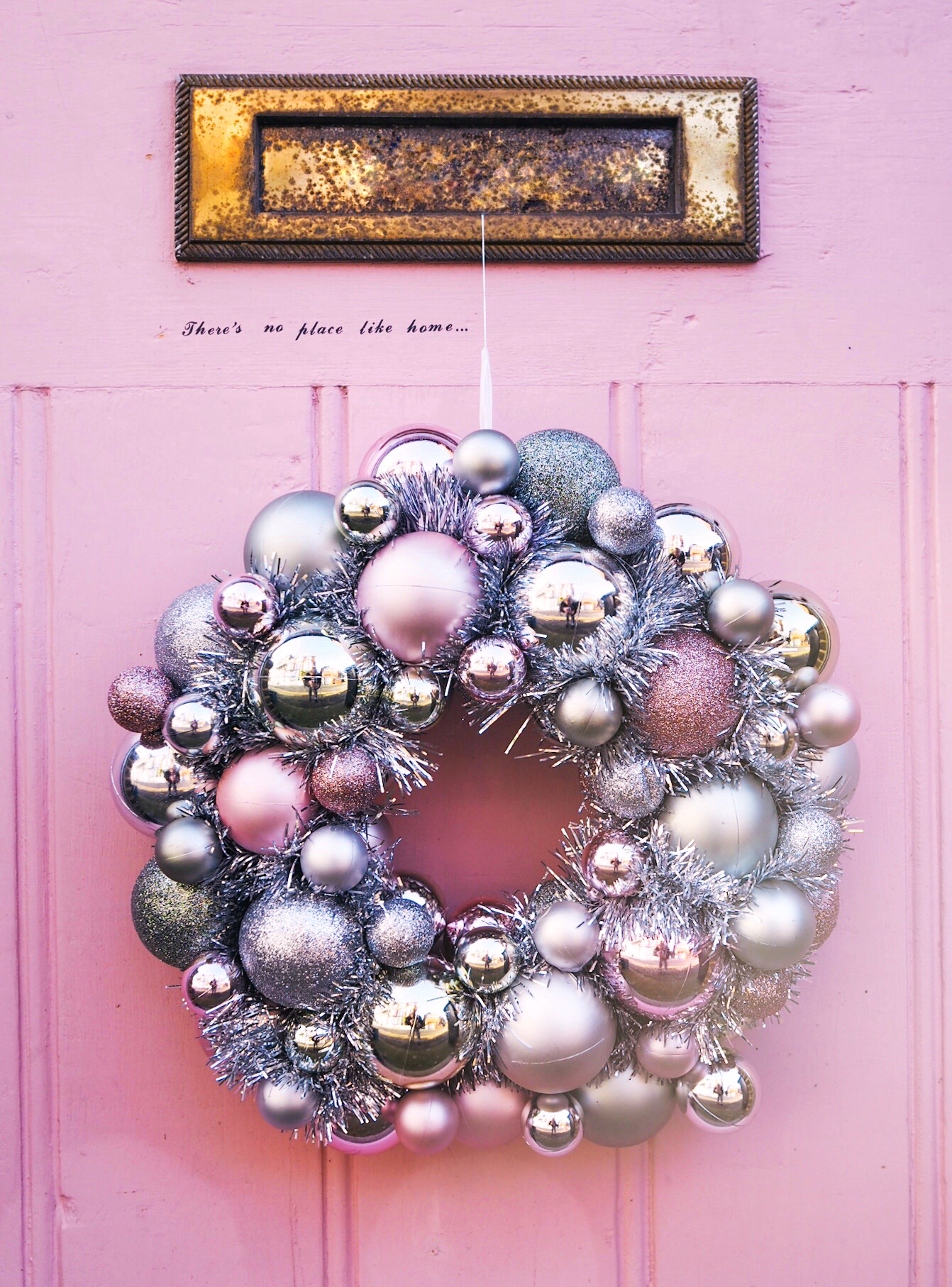 Firstly, HAVE FUN! I did not take this Christmas display seriously, I literally just gathered together some sparkles and kept moving things around until it looked cute! I played around with shapes, colours and heights and even thought he leopard isn’t necessarily a festive ornament, the colour popped and I thought ‘Why not?!’. Also with artificial christmas trees, you often get a REALLY ugly base. My trees are no exception! I was going to wrap some boxes (or gifts) to cover up the base, but quite frankly, that seemed like too much work, so instead I popped in the lantern and decoration to cover up the base and I actually really like the layered effect it gives. Finally, the garland, this was a but of an issue for me. My initial thought was that I could secure the garland with staples, but I hated the idea of putting staples in the stairs after we spent SO LONG renovating it. It was such a labour of love and the idea of attacking it with a staple gun for a few weeks of glitz felt so wrong. So I simply just hung the garland and used a tiny strip of tape to secure the ends and viola! No staples needed! And finally, HAVE FUN! It’s Christmas, more is more and it’s only going to be up for a few weeks so you may as well have some fun with it!

So, there we have it… my colourful christmas decorations! I think I’m going to update it in a few days because I have some more treats in the post and possibly something coming in the post, but for now… enjoy! Also, once again, a huge thank you to Matalan for gifting me the amazing bauble garland, bauble garland, matching mini tree and the red & white cone trees, I love them all! 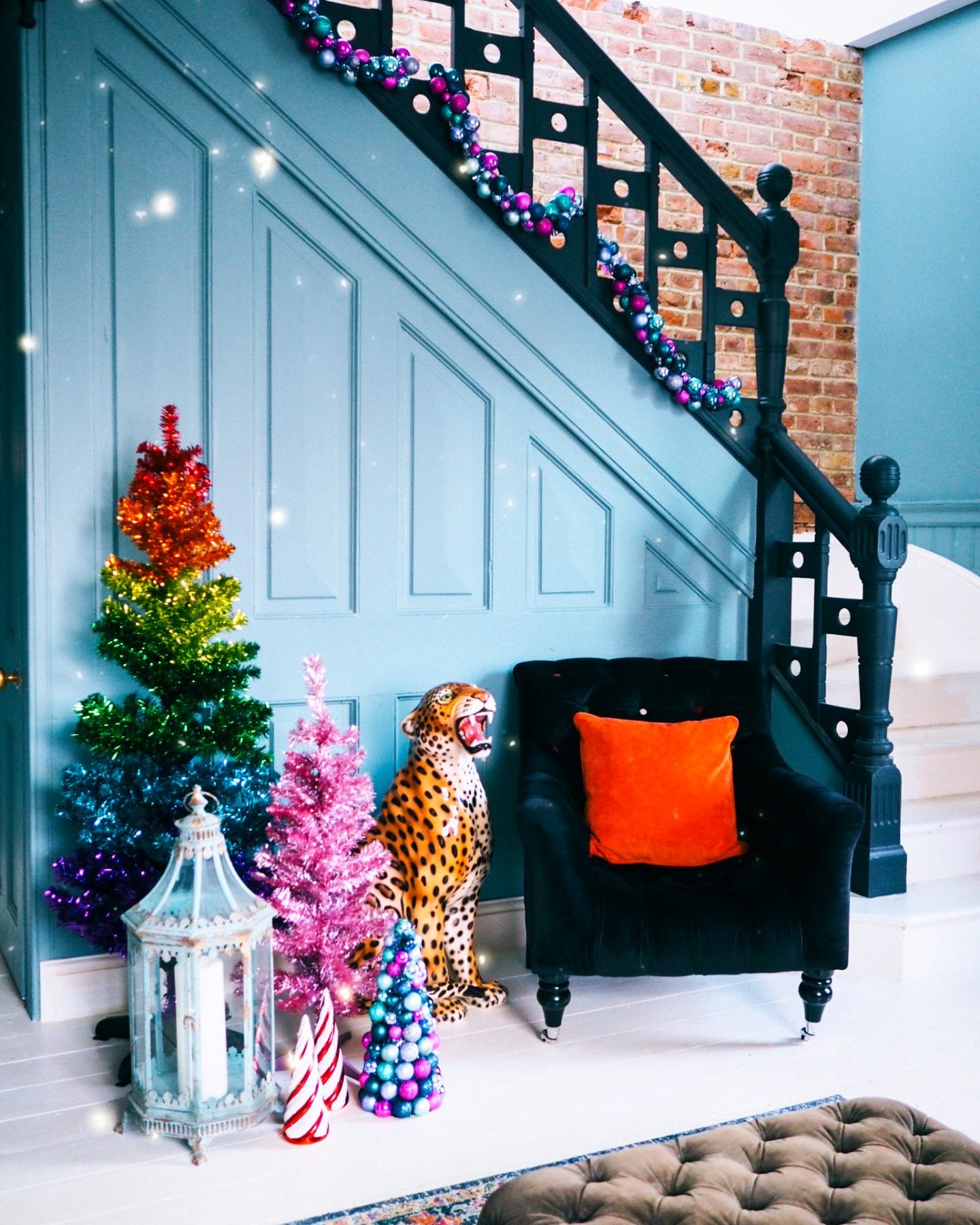 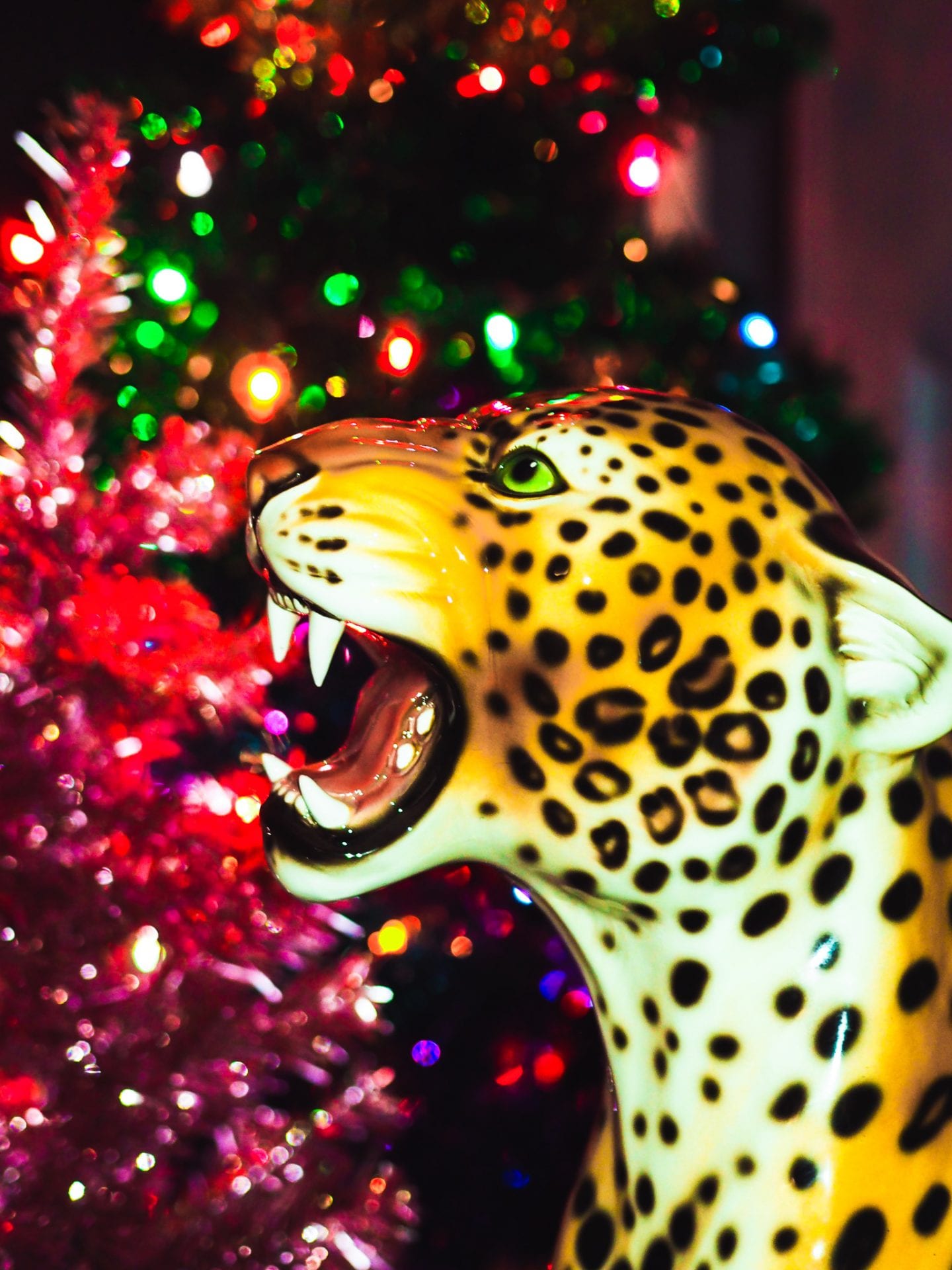