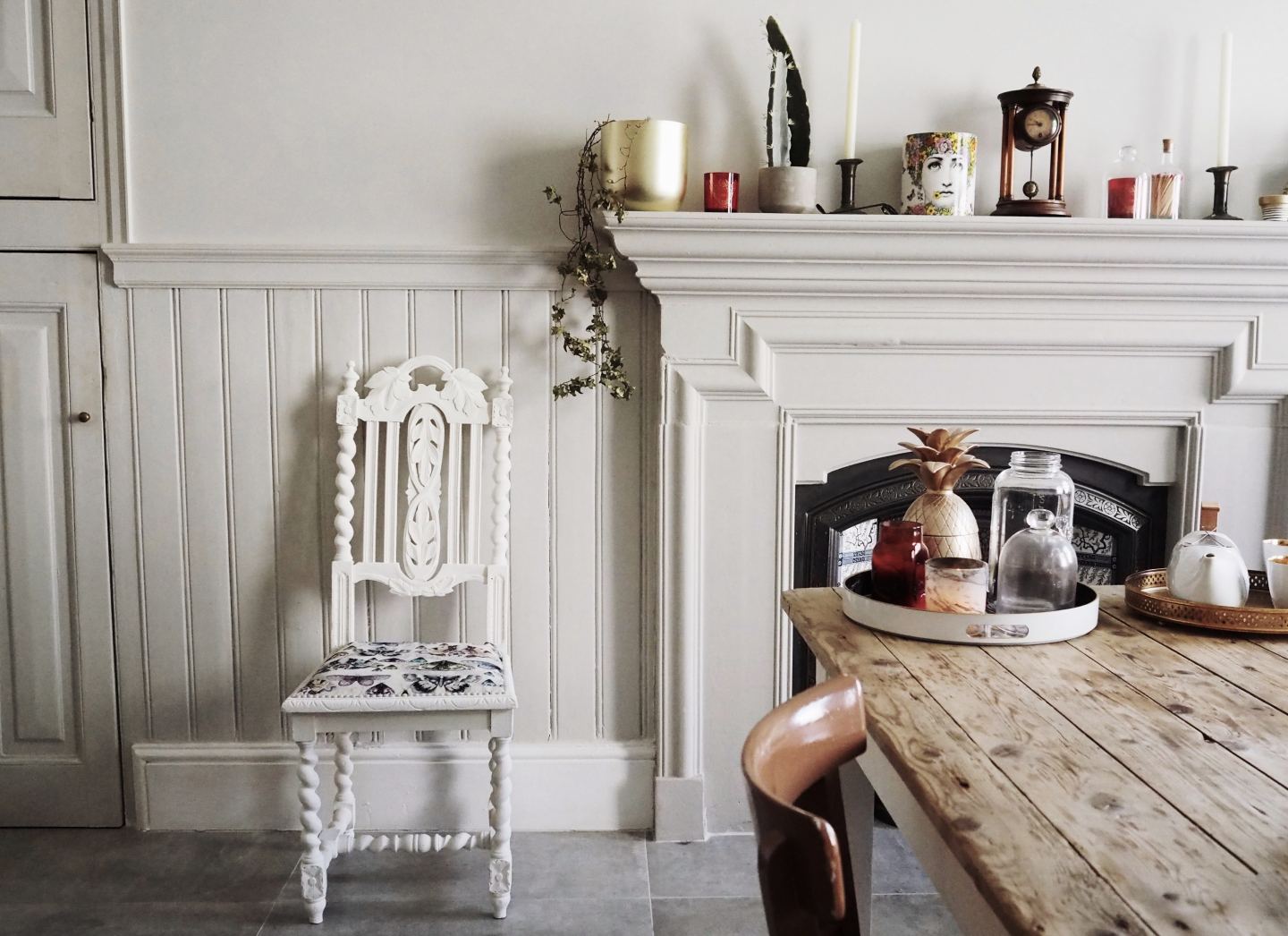 OK! Yikes! So, where do I start with this one! Well, I guess the beginning! I think it was around October last year my lovely neighbour knocked on my door and said she was doing a charity shop run to drop off some furniture and did I want to take a look and see if I was interested in anything. Of course I said ‘yes’ and I ran out into the street (still in my slippers!) to scan the boot of her car. She had some beautiful pieces but fearing my boyfriend would throw a fit if I took it all, I eventually picked out one chair which would make a fun up-cycling project. The chair then sat in my hallways for 4 months! No joke! I never once sat on it, but I did frequently think ‘I should really think about renovating that chair soon!’. 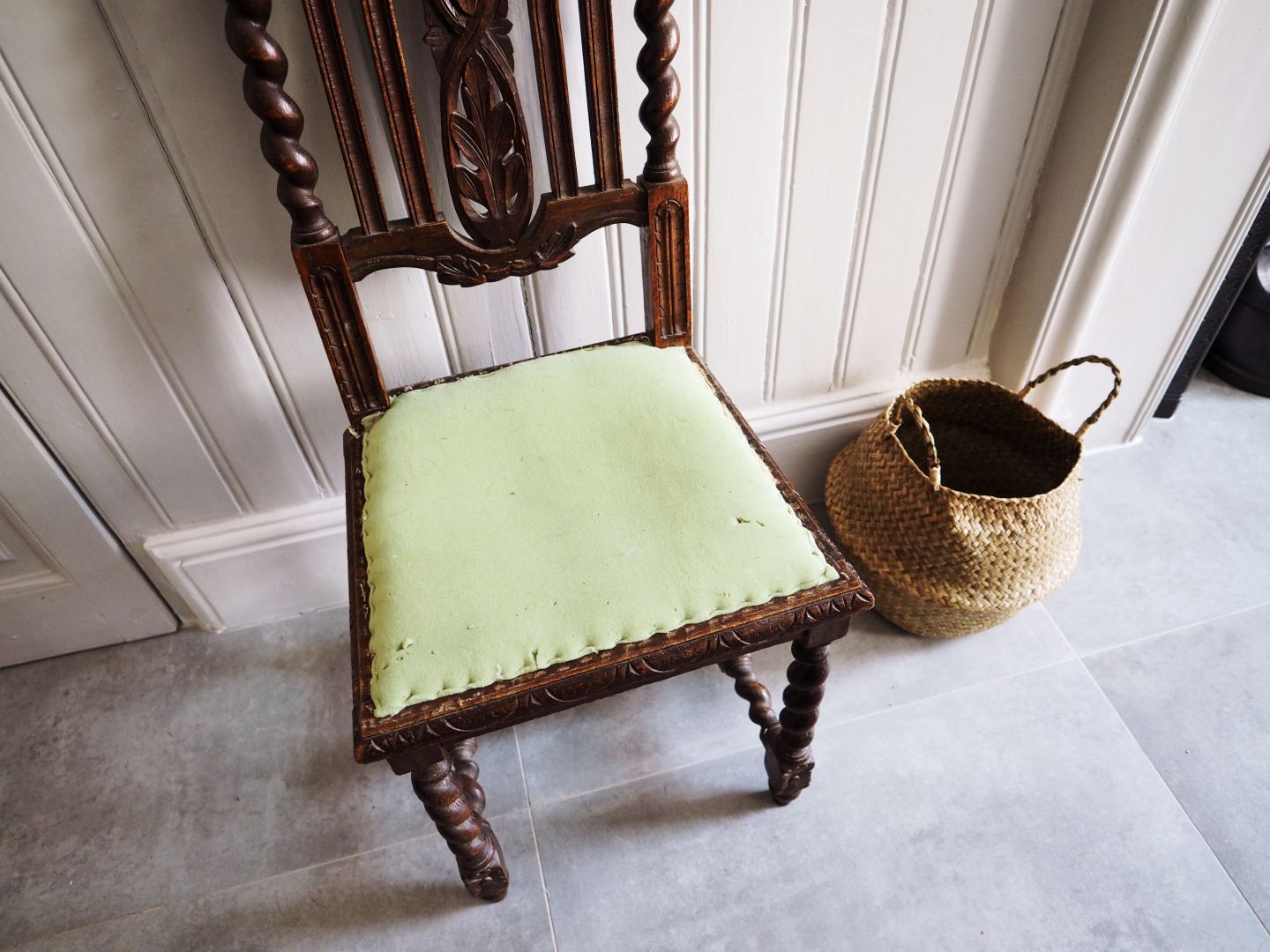 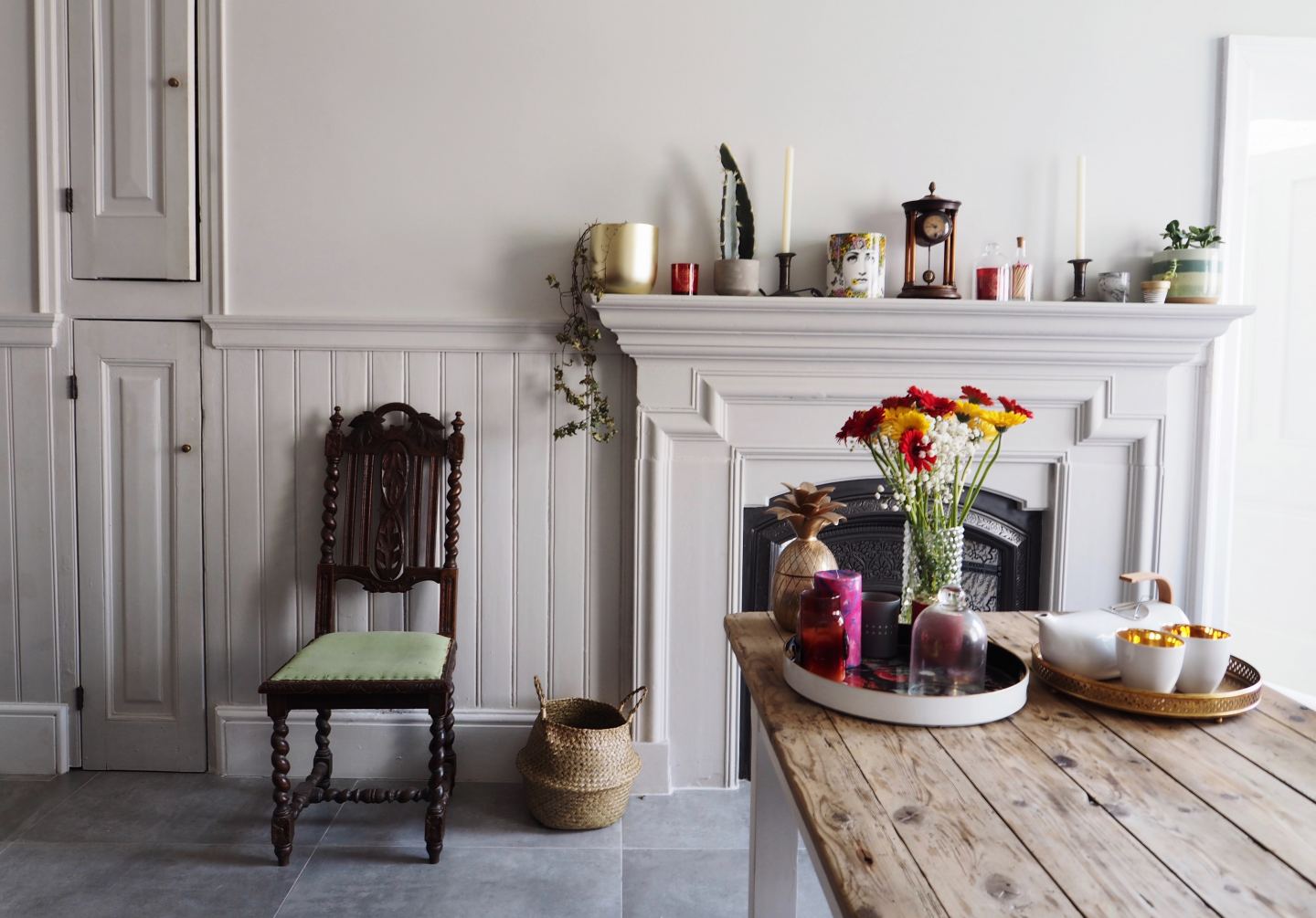 I think the reason I kept putting off starting the project was because I knew that the re-uphostering part of it would be a challenge. I’m a dab-hand at painting and pulling old staples out of wood, but reupholstering is something I’ve never done before and I’m not gonna lie, I was nervous! So the chair sat in my hallway for months and then last week, I finally got up off my butt and ripped up the old fabric and so the project began! It was actually a really fun job, it took me a little longer as I had to figure it all out as I went along, but if I had to give it a difficulty rating, it is actually pretty low difficulty, it’s just fiddly and time consuming, made even more time consuming because I kept re-doing everything until I was happy with it! It’s also the most basic upholstery you can do, so it’s a great place to start if you are thinking about trying a project like this!

Also, just a side note here, I’m a complete novice at this. I might be doing it the wrong way, but I did it and I think it worked out fairly well! Please be careful when using tools. 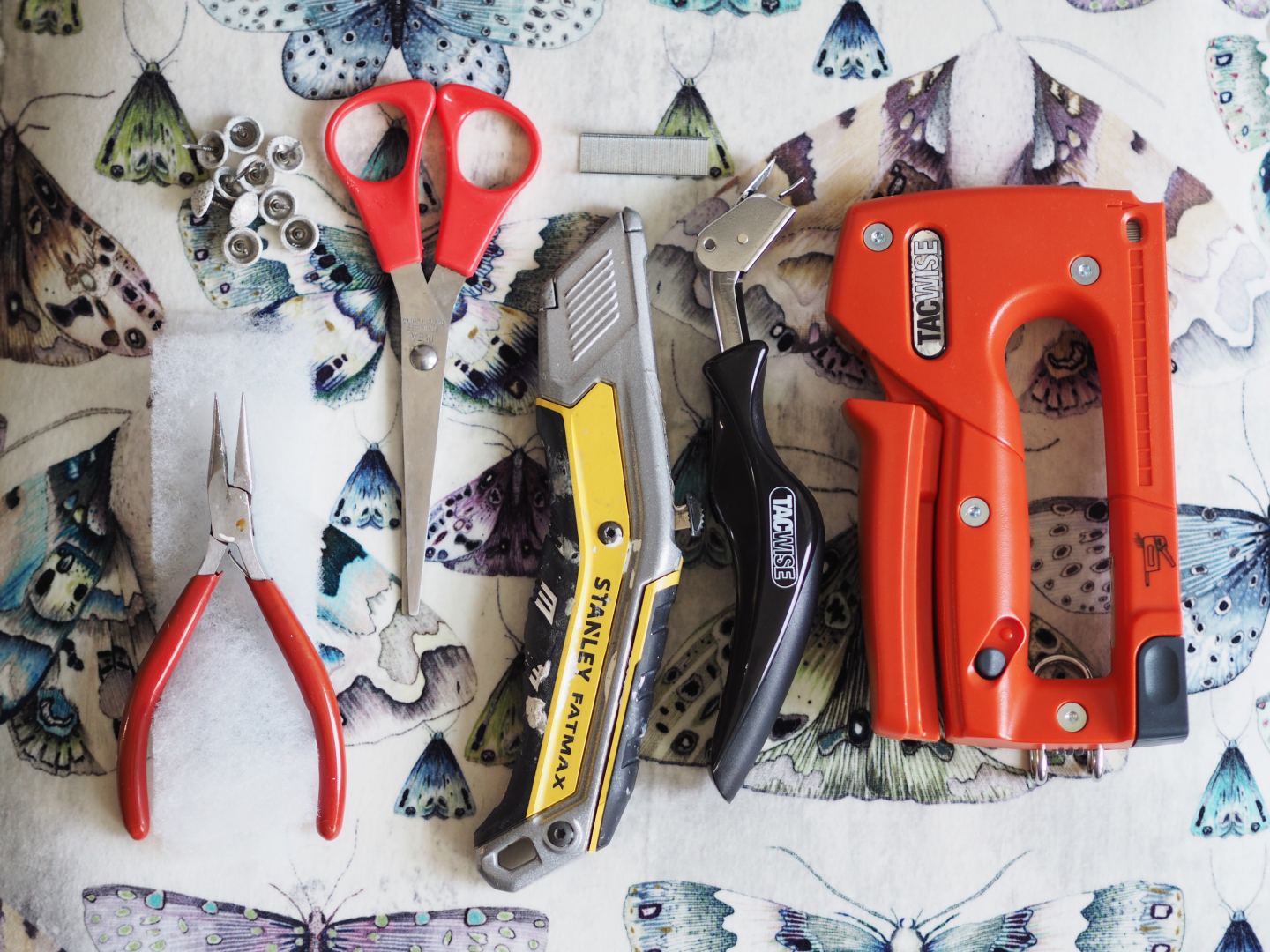 Paintbrush (I always use Harris Brushes) 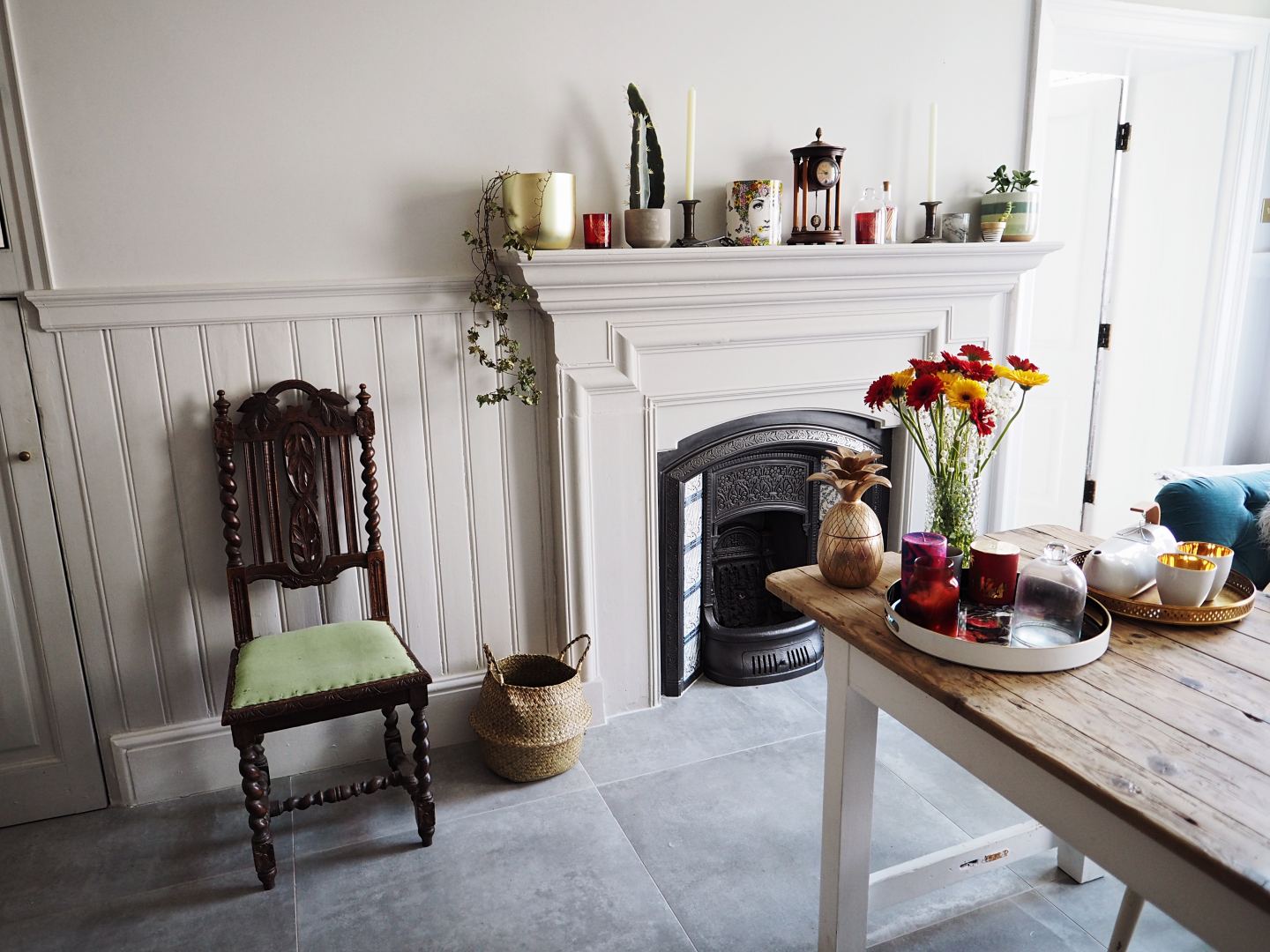 I probably should have documented the process better, but let me try and explain and I’ll cobble together as many photos as I can to try and demonstrate! First up, I got a Stanley knife and basically made a slit in the old brown fabric so I could rip it off the fabric and trim away from the wood. It took a fair bit of force to get it off as it had been glued and stapled, but it didn’t take too long. Once the fabric was off, I then had to go around the top of the chair removing all the old staples off the wood and scraping the remains of the glue off the wood. 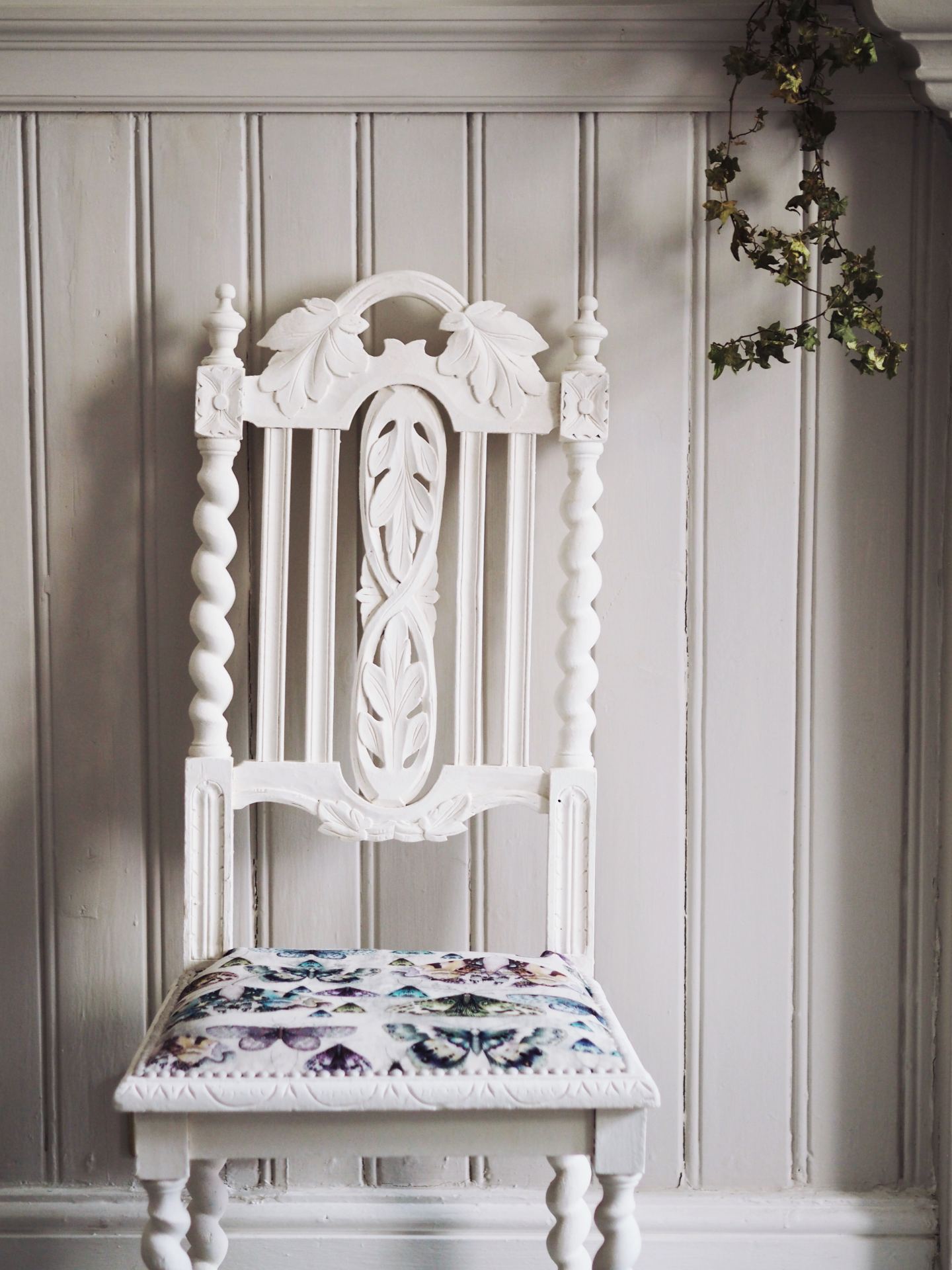 When it comes to painting old furniture, you have two options. The first includes a hell of a lot of sanding, scraping and frankly hard AF work to get it back to the bare wood. Then you can prime and paint the chair. It’s a LOT of work to get it back to the bare wood, especially with a chair like mine which includes a lot of carved detail. The alternative is Chalk paint, which I’m sure you all know is a lovely matte finish paint which basically applies to any furniture surface. I obvs took this easy option and used Johnstone’s Furniture Chalky Paint in Cushion White. I did two pretty think coats. 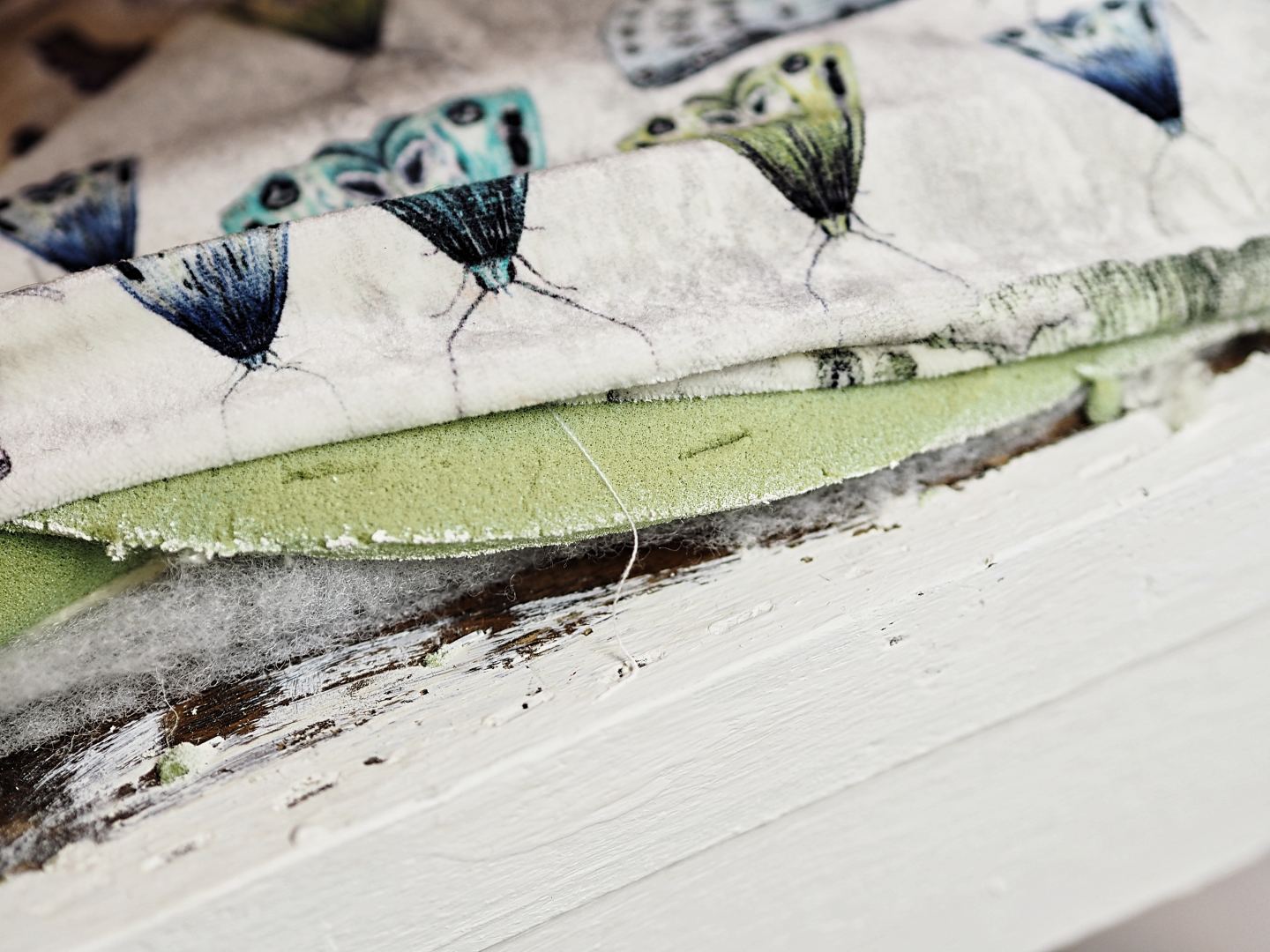 You might notice from the photos that underneath the old fabric was a rather lovely green foam base and cushion stuffing beneath that. I’m sure years ago this chair was nice and rounded, but over the years it had gotten a little saggy and flat. I wanted to give it back that lovely round, plump cushion shape, so I removed the staples / tacks on the back side of the chair which held the foam to the wood and slipped a square of wadding between the old cushioning and the foam. Once it was in, I made sure it felt even and then I re-tacked the foam to the chair. It was super quick and easy, but it’s given the cushion a much nicer shape. 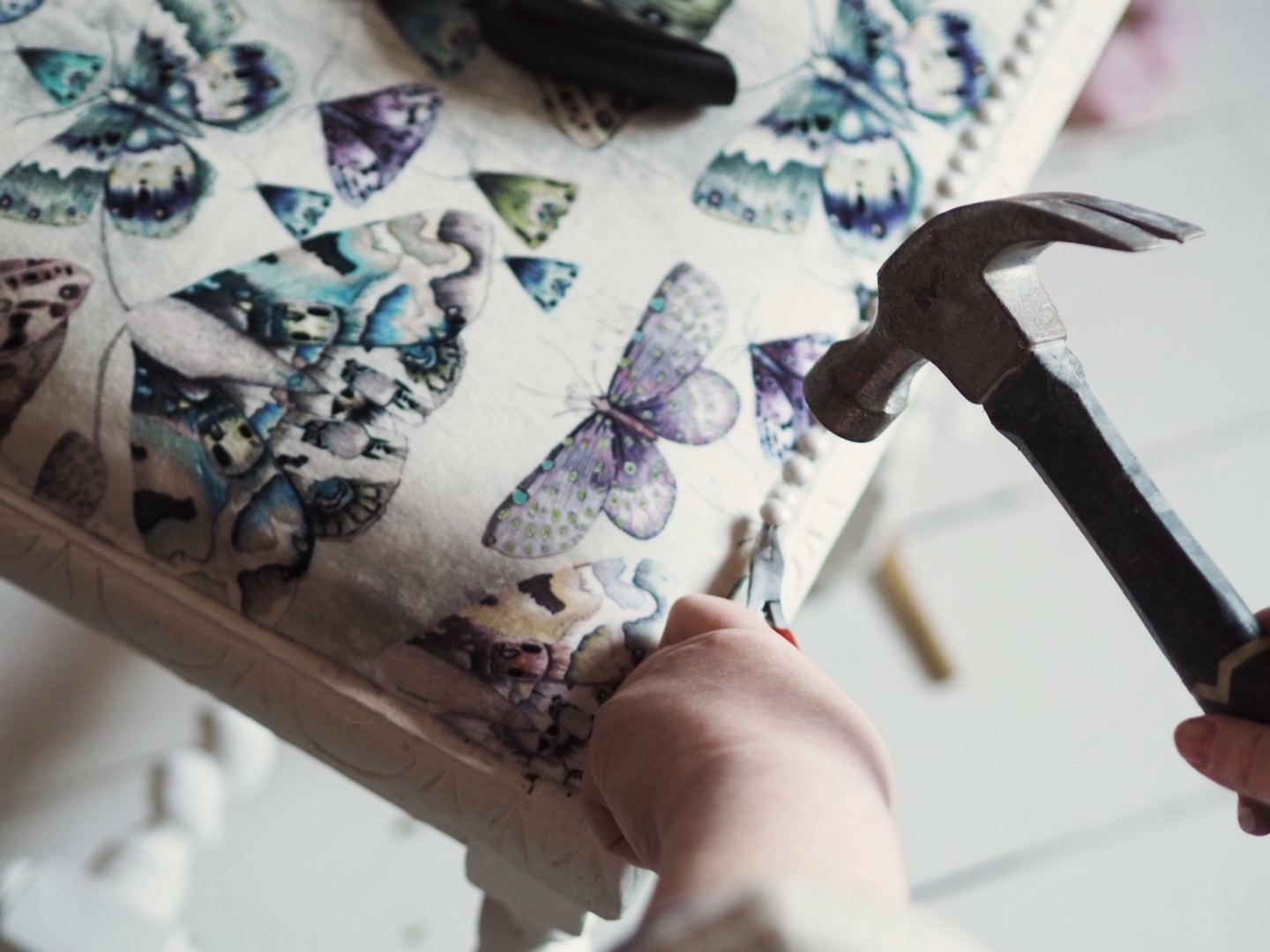 Ok, so this was the part I was nervous about, recovering the cushion with new fabric. Which for any pro upholster is a pretty basic job. I did search for youtube videos to teach me how to do this, but all the videos I found were for different styles of chairs where the cushion part could be completely removed from the chair, recovered and then easily fitted back onto the seat. Annoyingly, that style of chair looks easier to recover! However, it was still super helpful watching these videos as I was able to pick up a few tips like the corners needed to be like ‘hospital bed’ edges and that I should tack staples in each side and build them up gradually, pulling the fabric as and when needed.

I started by laying the square of fabric onto the chair, making sure I had plenty of seam allowance on each side. I checked that I was happy with the placement of the print and then when I was, I folded the front edge of the fabric to create a seam and then did my first few tacks along the front edge of the chair. I made sure I kept the fold straight and my tacks fairly far apart in case I wanted to remove them later, this would make it easier to remove them and also cause much less damage to the fabric. I started in the middle and worked my way towards the edges, but not too close to the edge as I needed room to make my hospital edges in the corners. I worked my way around each side of the chair, occasionally taking out tacks to reposition the fabric. I tried to keep the print straight and the fabric wrinkle-free as I went along, correcting myself where needed.

Once I had attached all the sides of the fabric, it was time to fold down and secure the corners. I’m not gonna pretend, this part was hard. You have to make tiny ‘hospital bed’ edges and then tuck them underneath. It’s fiddly and you have to be precise. If your fabric is quite thick like mine, you might have to cut a tiny triangle in each corner just to de-bulk the folds and create a smooth corner.

At the back of the chair, I did similar kinds of cut and folds, but this time making the folds go in and around the wood. Again, it was a fiddle, but I got there (you will too!). Just a reminder, when you are trimming the fabric to help create neat corners, be careful not to cut off too much fabric as you need to keep some kind of seam allowance. If you cut too much it can be really hard to salvage and if the fabric starts to fray, at which point you will have to basically start all over again (yes, this did happen to me!)

Once I had tacked along each side and made nice tidy corners, I inspected it for any baggy patches or wrinkles. If there were any, I removed the necessary tacks, smoothed out the fabric and re-stapled it back into place. At this stage the fabric was completely attached to the chair, the staples were generally around 2/3cm apart and the corners were neatly folded in. “From far away it’s okay, but up close it’s a big ol’ mess.” The studs will give the chair the ‘finished’ look and also help secure the fabric to the wood. 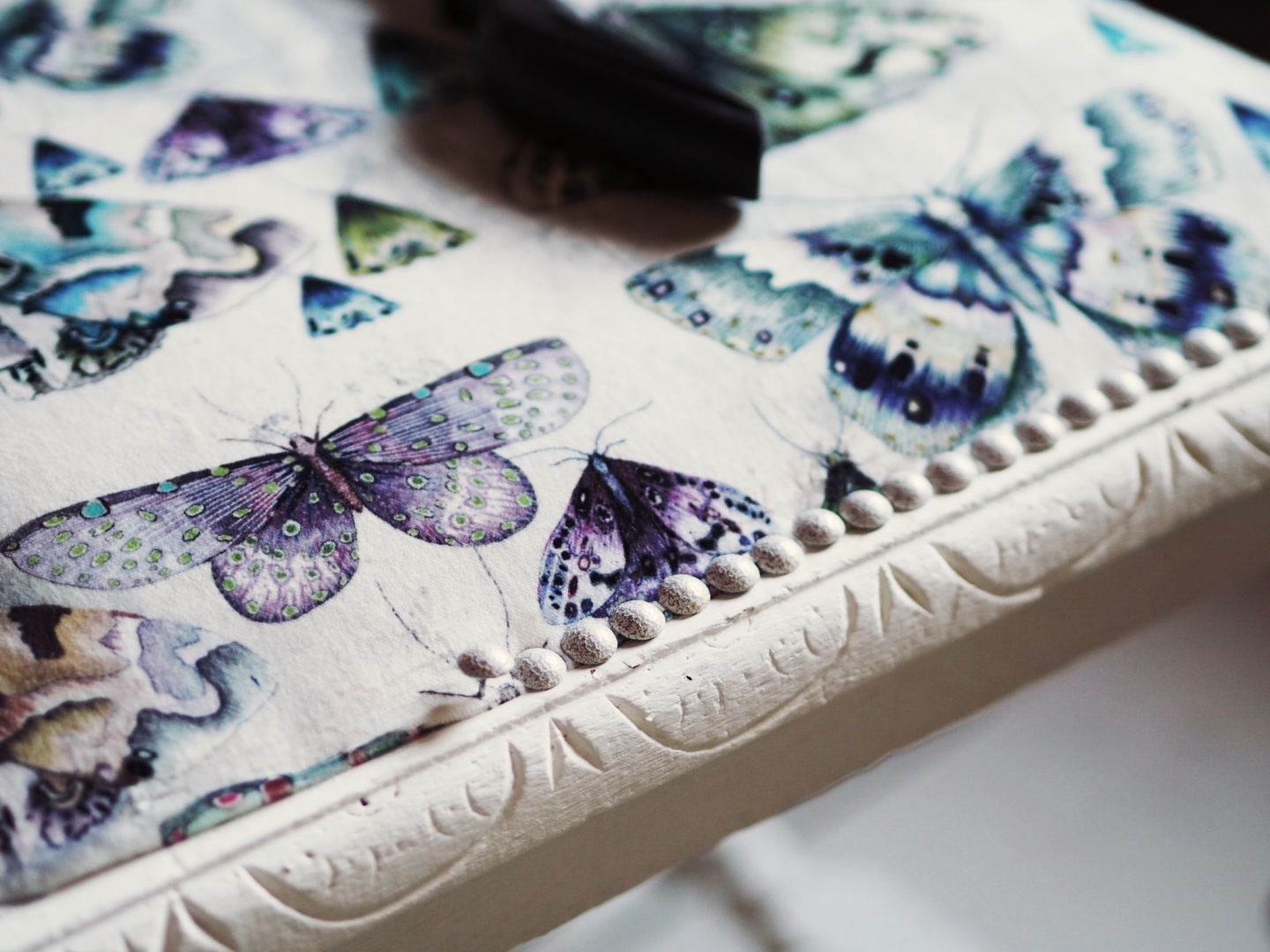 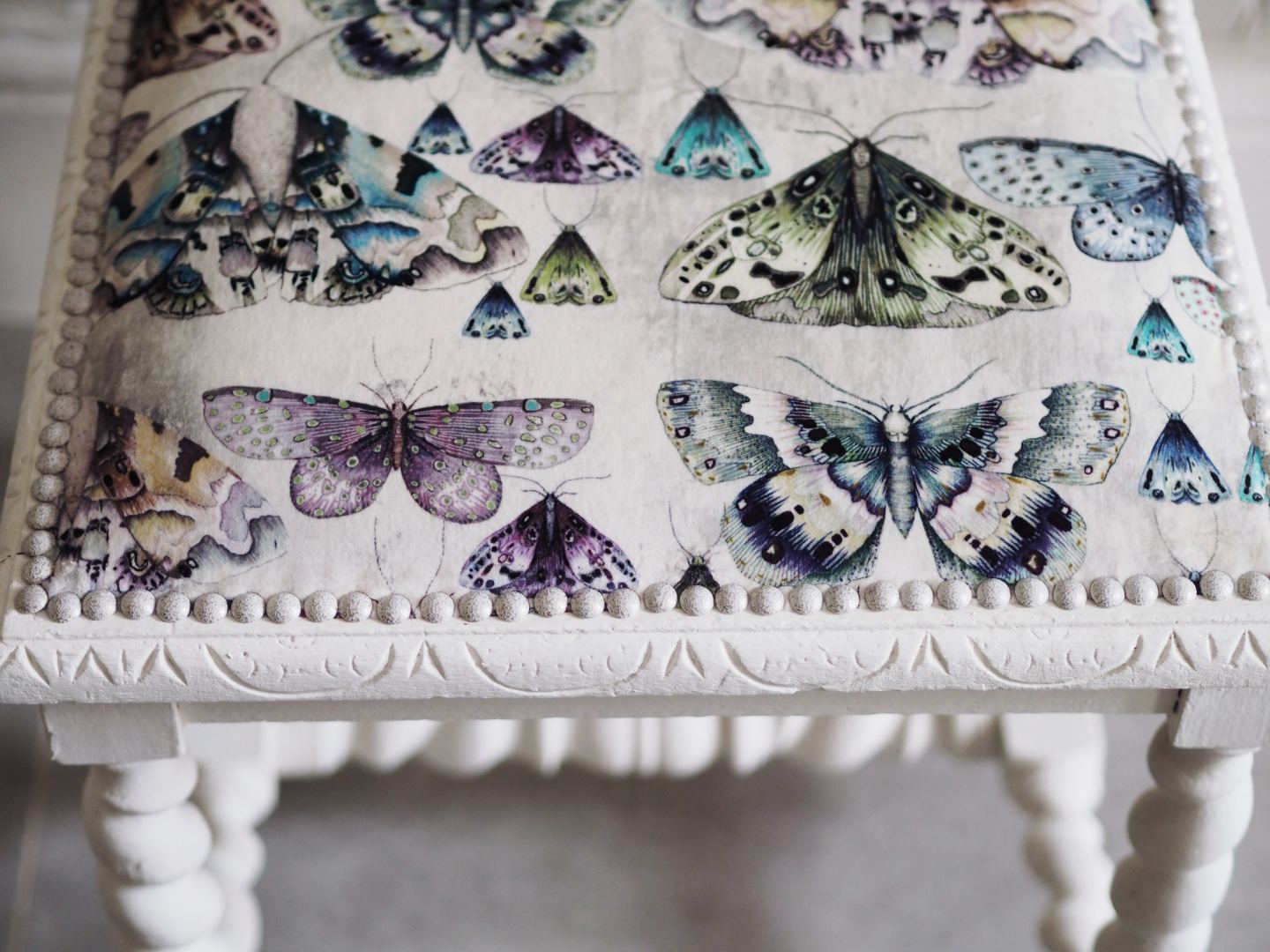 I didn’t expect this to be such an labour-intense job. It took longer than I expected and it’s actually quite hard to hammer those studs in straight, nicely spaced and all in a perfect line. Please don’t look too closely at my studs, they aren’t as neat as I would have liked! I don’t know if this is the professional way to do it, but I started at the front of the chair and worked my way along the edge. Trying to position the studs in the middle of where the cloth meets the wood, disguising the seam and the staples I used to tack the fabric down. Any visible staples I removed with my little tool. Again, the devil is in the detail!

The hardest part was lining up the studs to create a straight line with even(ish) gaps.  I did find myself pulling a lot out and replacing it a millimetre to the left of right, I also nailed some in at an angle which I had to pull out too. If you look closely, it’s not a perfect line, but I don’t think it’s bad for a first attempt. I worked my way around the chair, starting along the front, then onto the left side and then the right side. Just so you know, I’m right handed, so the right side of the chair was a little trickier to do than the left side, so stick to the side which is easiest first so you get a bit of practice and get into the swing of it. 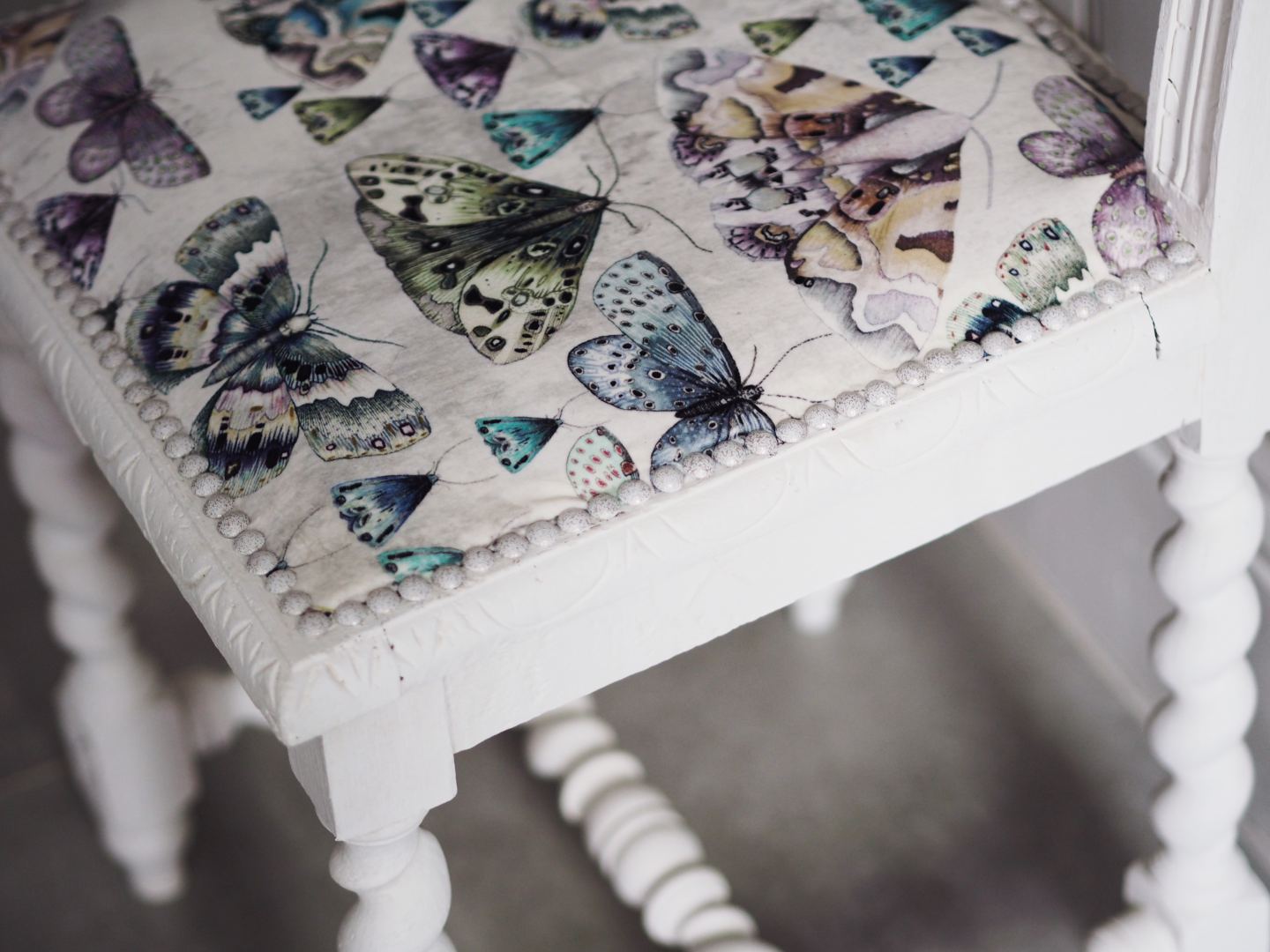 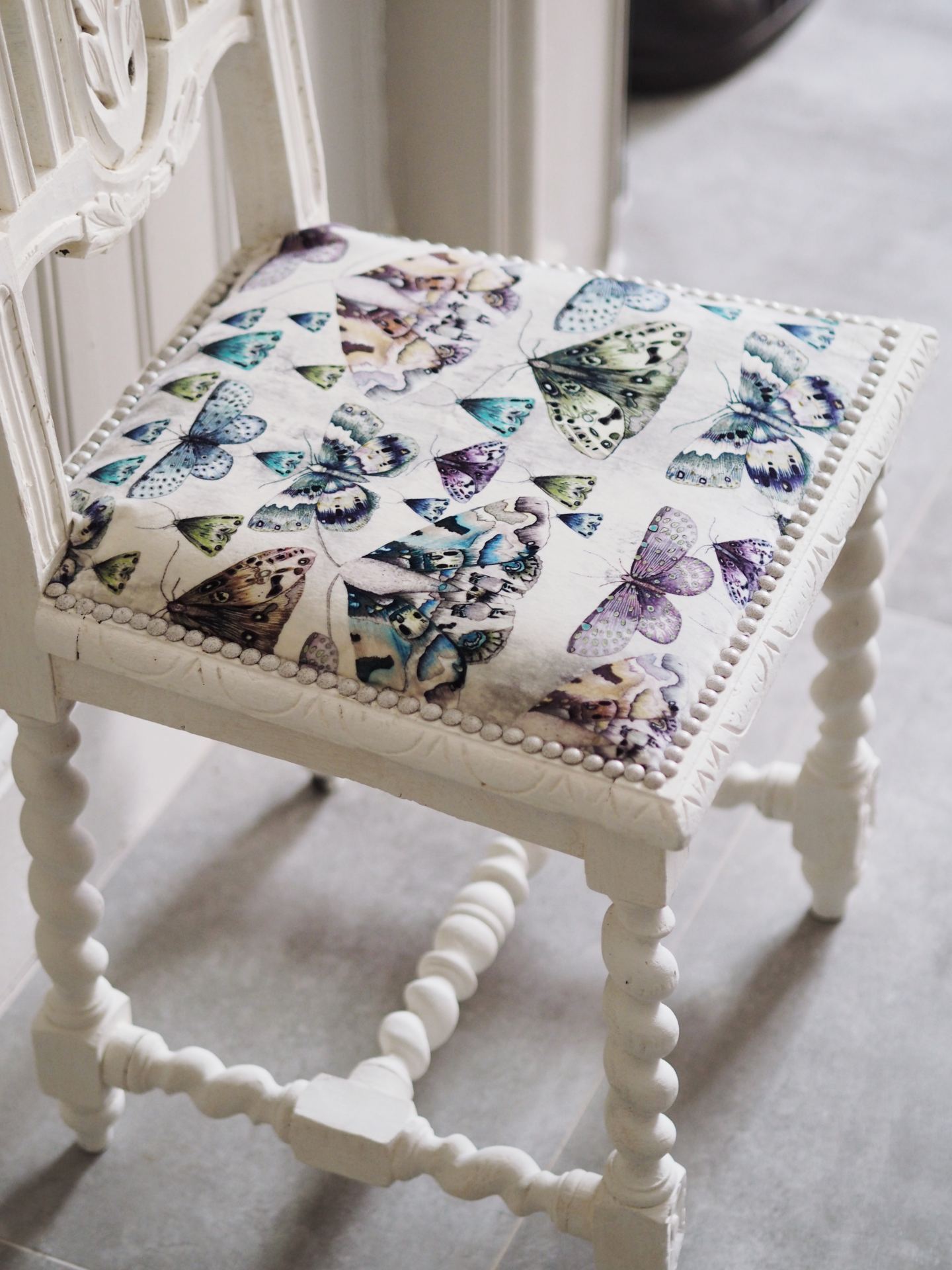 Once you have studded the front three sides of the chair, this is your last opportunity to make sure that you are happy with the tautness of the fabric. Remember the cushion might loose it’s fullness over time and the fabric will naturally stretch, so you want the fabric to be stretched tightly over the cushion, to avoid it becoming baggy later down the line. If needed, remove the tacks along the back edge and pull the fabric a little tighter. Staple it back into place and do your final row of studs! Finally, touch up any bits of paint that you might have chipped or marked the you were hammering in the studs. Be very careful not to splash any paint onto the fabric, you should only be doing tiny touch-ups at this stage. So, do them very slowly and very carefully!

…And that’s it! You’re done! Congratulations!!!! My best piece of advice would be to take your time, concentrate and keep re-doing anything you aren’t quite happy with! It’s not hard, but it is a little fiddly and it takes time and concentration!

I was kindly given the Chalk paint and Paintbrush by Johnstone’s Paint. Most of the materials I either owned already, or were bought from Amazon or Ebay. As mentioned, the chair was very old and given to me by my neighbour. 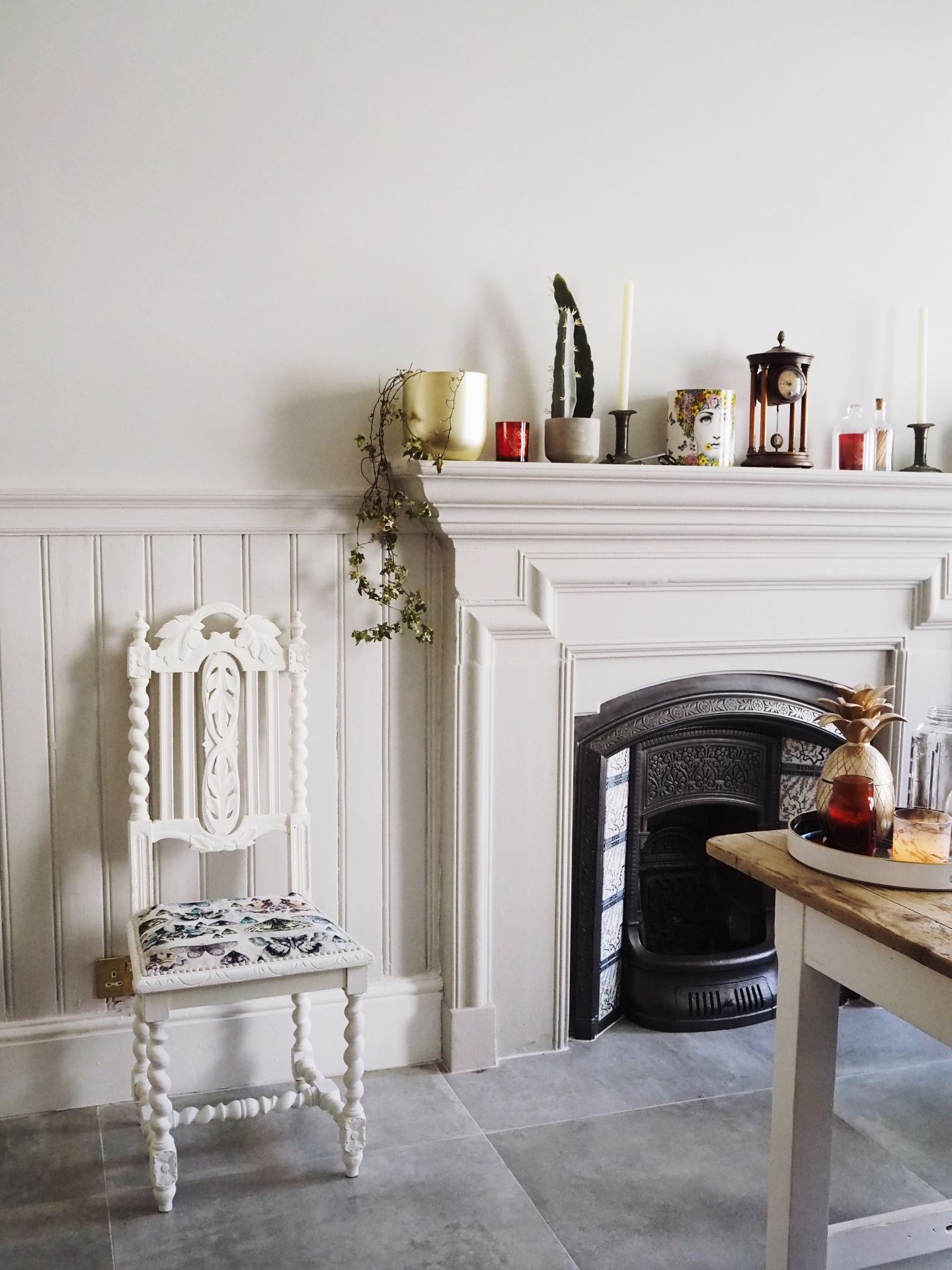