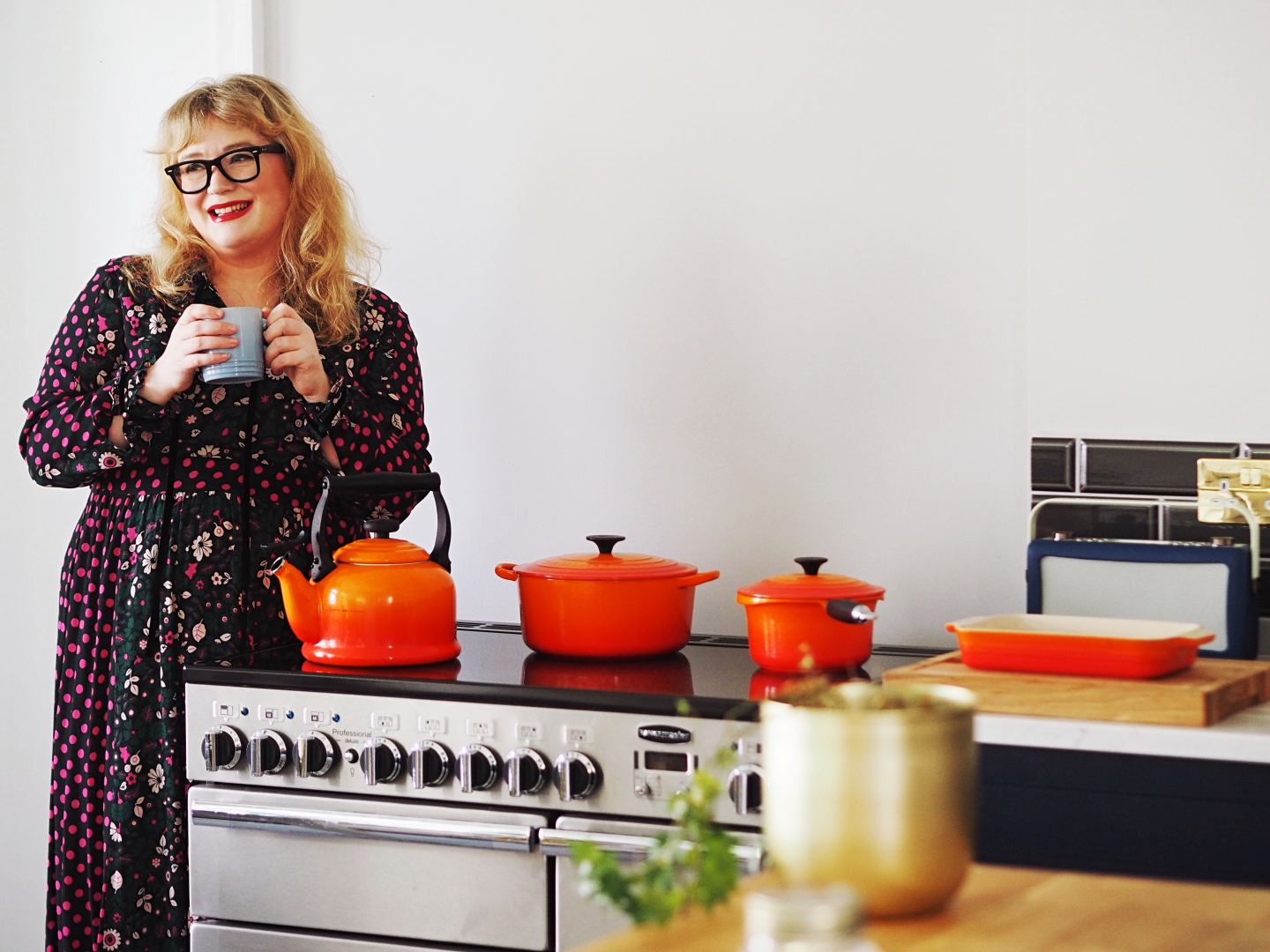 A Sneak Peek At My Kitchen

I’ve been feeling really nervous about sharing photos of my kitchen for a few reasons. Firstly, it’s not 100% finished in terms of accessorising and secondly, we worked SO hard to get here and it feels kinda big sharing it. This kitchen took its toll on us, in so many ways. From stripping the old paint off the fireplace with toxic chemicals and chipping the plaster off the wall to get to to the bare brick. And of course, that before we started to think about finding the funds to rip down the ceiling, replaster, refloor, repaint and design a brand new kitchen with all the white good we needed. We didn’t have a fridge for two years, for a while the windows were boarded up and there was even a hole in the wall which lead straight outside where an old extractor fan used to be. I wish it wasn’t true… but it is. Even though we aren’t quite finished accessorising and we have a few touch ups to do, I honestly feel SO proud of how far we have come! 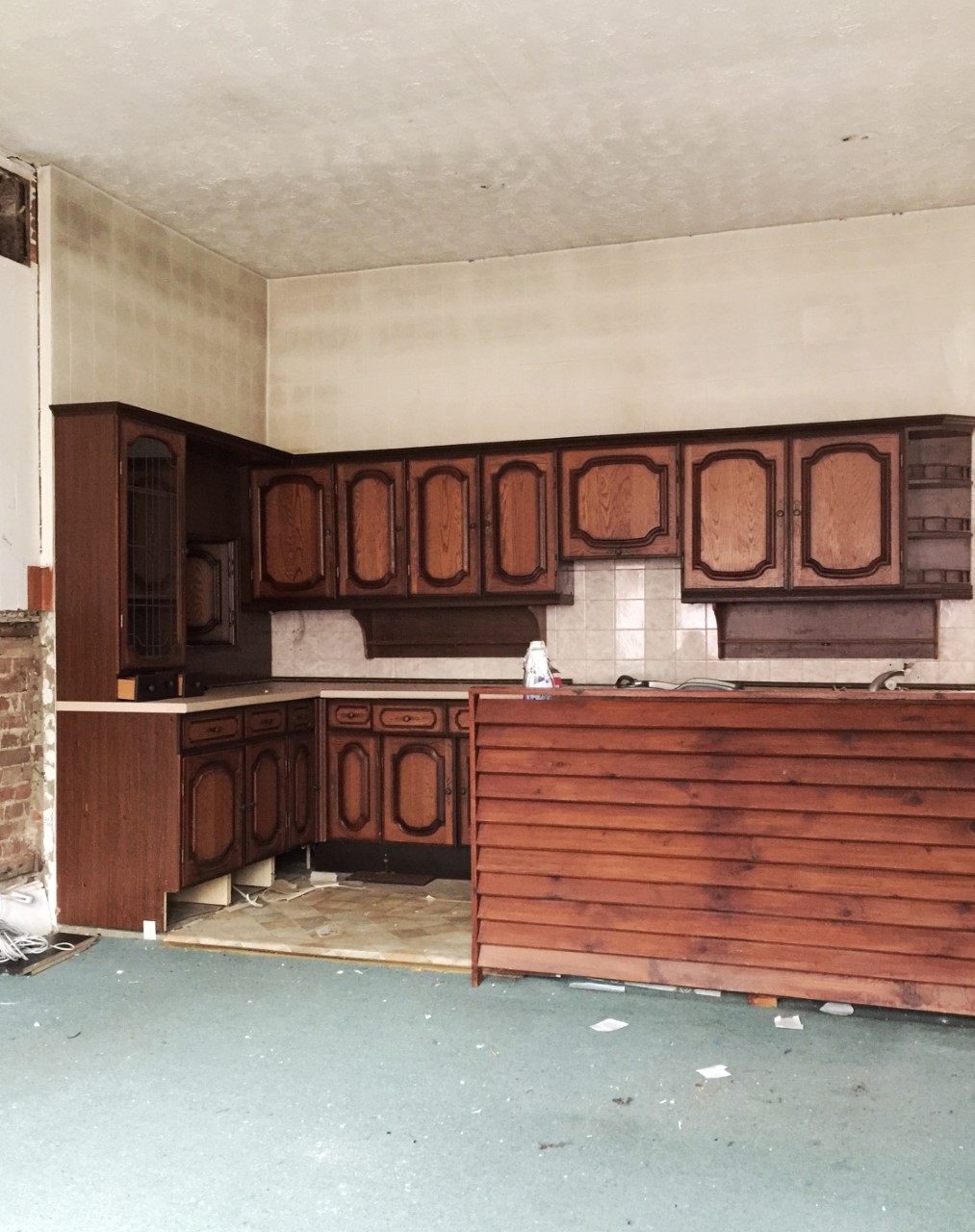 In all it’s glory, here is a before shot of the kitchen. I think at one point it might have been used as a bar or a commercial kitchen as there was a fire extinguisher, a small basin to wash hands next to an industrial metal double sink. The oven leaked gas (so along with having no fridge for two years, we also had no oven!) and there was no washing machine either, so we were forever running to the laundrette for service washes. As for the green carpet, ceiling artex and raised section of the floor… let’s not even go there! 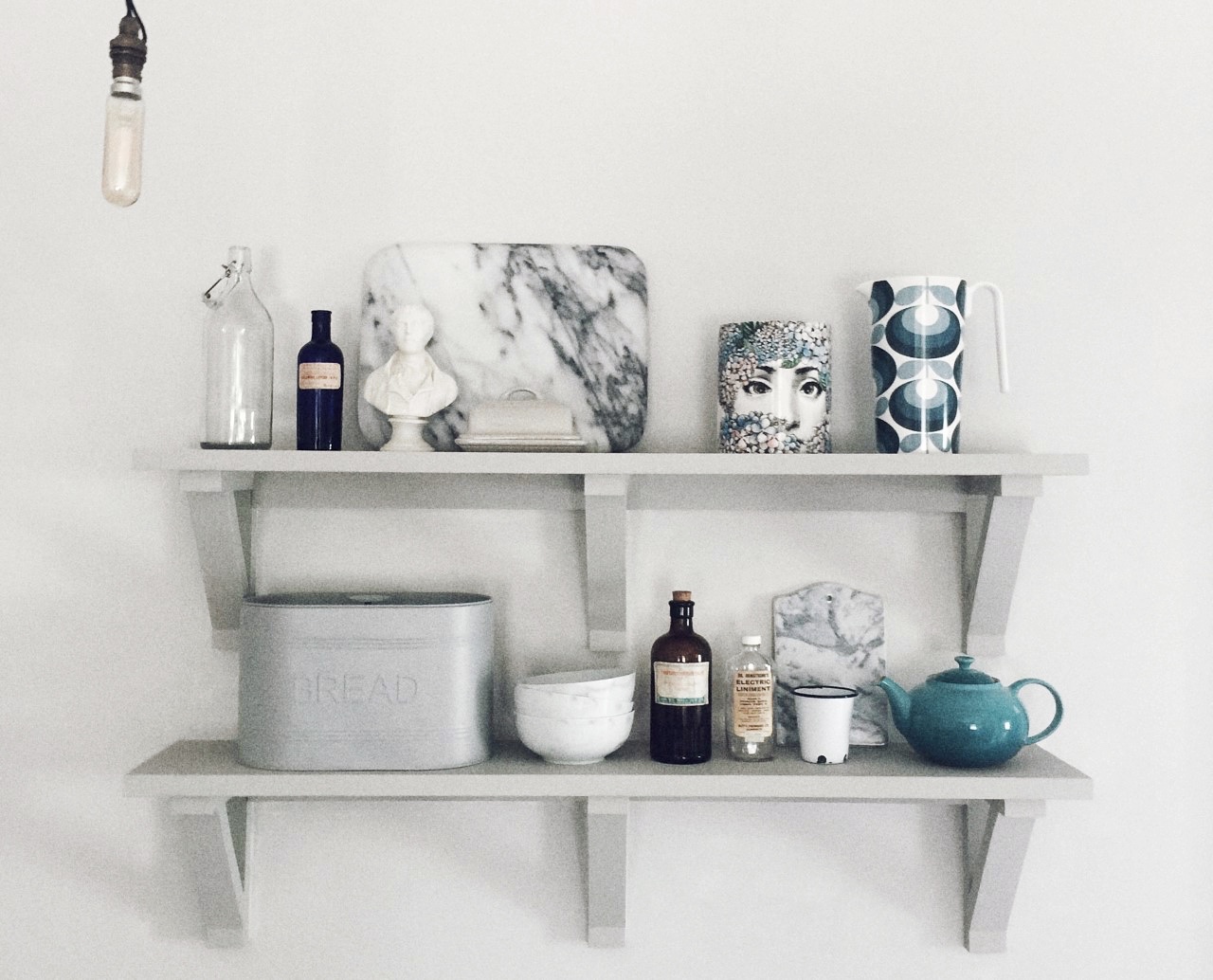 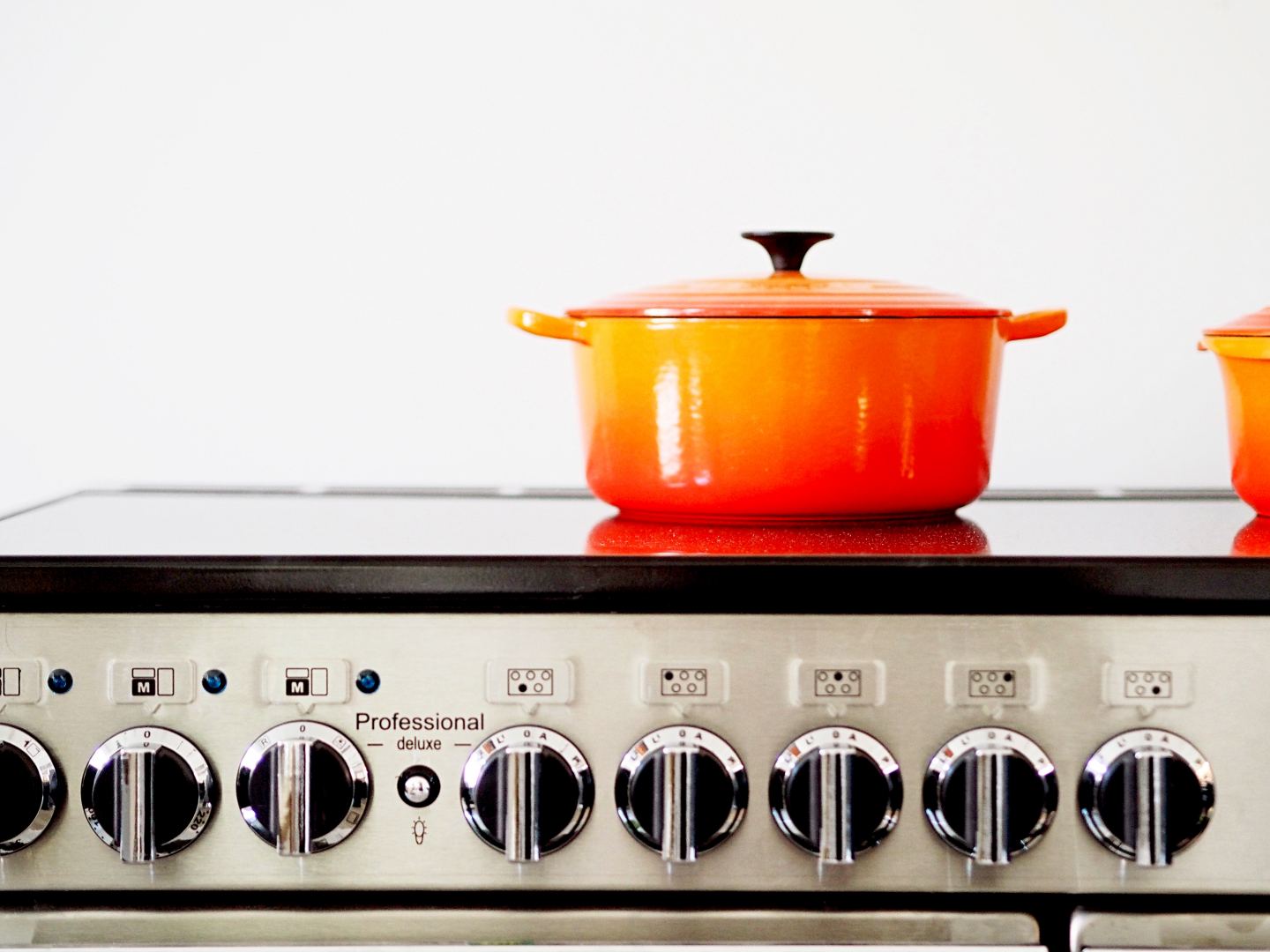 The Cooker That Dreams Are Made Of!

Now that you have seen the before shot (and believe me, I could show you more!) hopefully you will understand why this kitchen makes me want to cry and smile all at the same time! As for the cooker, I think this is my favourite thing in the kitchen! It’s the thing that dreams are made of! Not only is it beautiful in terms of design, but this uber-fancy Rangemaster has a five-ring induction hob, two ovens (including one fan oven) a grill and enough space to cook Christmas dinner for an entire army. After not using an oven for two years, it’s going to be a big adjustment but I’m ready for the challenge!!!! I got it from AO, it came super fast and they can even collect and dispose of your old cooker for you and fit the new one for you on arrival. It’s a brilliant service and I can’t recommend them enough! Or this oven for that matter! 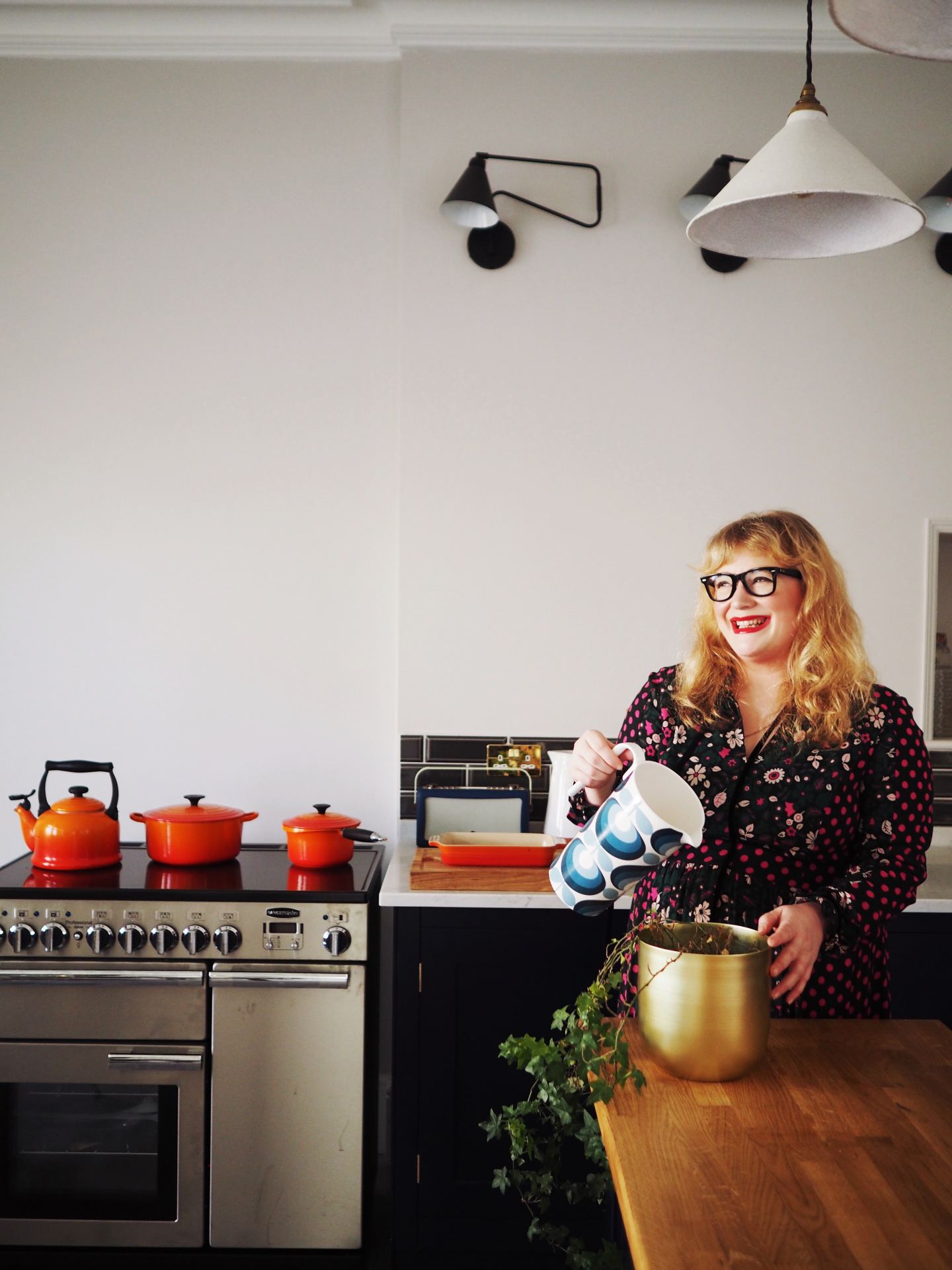 I’m Cheating On Fashion For Homewares

I never thought I would say these words, but shopping for kitchen accessories makes me SO happy! Even happier than shopping for shoes and handbags makes me!! I have become one of those people who loves buying vases, sorting my food into Kilner jars, watering plants and shuffling things around to make them look cute and generally just spending my time arranging wooden spools in pots. I never thought I would say this, but pottering around in the kitchen has become my new happy place! In terms of where to buy the best homewares, I can’t recommend Matalan enough for really beautiful and affordable homewares, as well as Amara for fancier pieces which add that ‘something something’ to the space. And of course… I have a bit of a thing for the classic orange volcanic Le Creuset, can you tell? 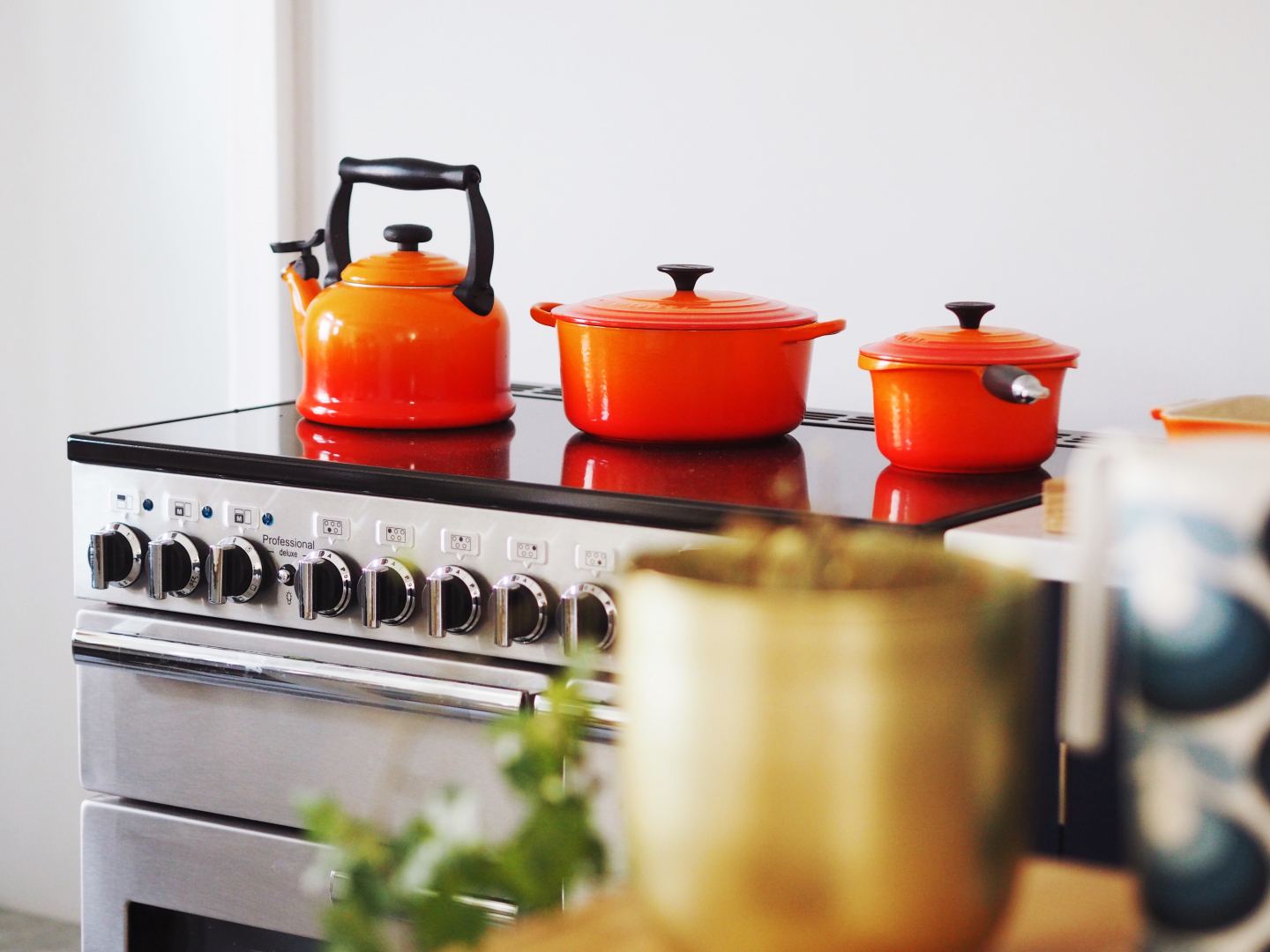 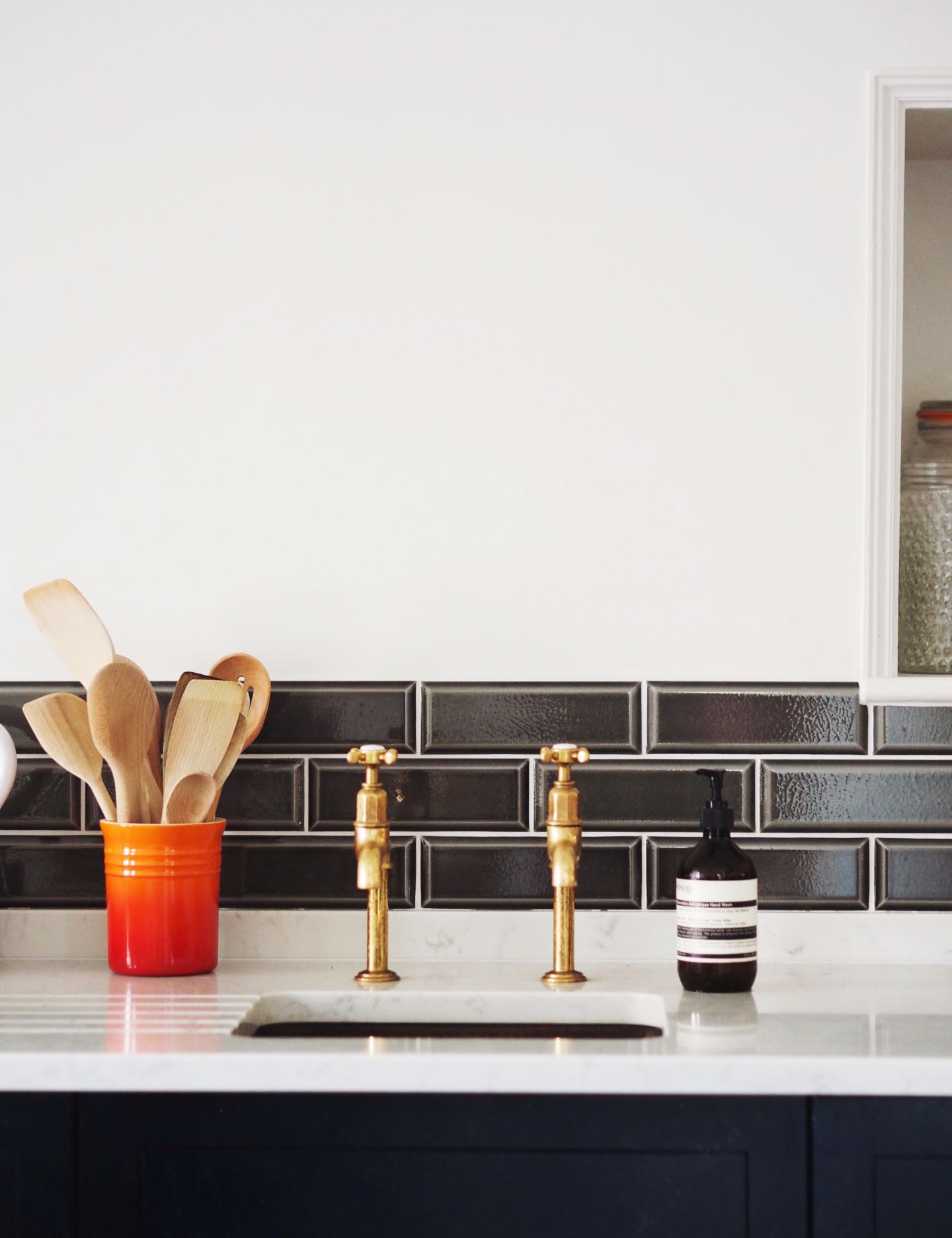 A Few Tips For Creating Your Dream Kitchen

Firstly, don’t rush into it! Admittedly, we may have taken a little TOO much time, two years without a fridge or an oven is excessive, but seriously, kitchens are expensive and you don’t want to rush into to and make a rash decision. This is a purchase that you need to love for a very long time and will have a massive impact on the value of your home if you are thinking about moving on at some point soon. For us, it was really important that we went with a kitchen company who specialise in high quality real wood kitchens and we loved the idea of it being customisable and repaintable… more on that later, I promise! I would recommend creating a pinterest board for kitchens that you like and then creating sub-boards of flooring, tiles, accessories, tables, chairs so you really define exactly what you are looking from a kitchen and ask your partner to do the same. Or at least look through your boards so you can find pins which you agree on so you have a good sense of the direction of the kitchen. Finally, my biggest tip would be to find a kitchen designer who not only understands the dynamics of a kitchen and how it should function best (the kitchen is like a cockpit. You want everything to be in the place which makes everything flow right!) but, you want a kitchen designer who understands what you are looking for who is will know exactly where to source the perfect sink, handles and taps and will be able to work with you on every single element of the kitchen design from the floors to the lighting to the cabinets to the wall colour. If they aren’t on the same page as you creatively, they aren’t the designer for you. I’m sorry to say this, but it doesn’t matter how creative you are and how pretty your bedroom or living room looks, but unless you are a kitchen designer yourself, it’s hard to create the perfect kitchen on your own. There is a LOT to think about with a kitchen design and it’s very hard, if not impossible to do it on your own! This is the one room where even the most confident interior designer needs their hand holding by a kitchen designer and my friends, once your kitchen is done, it’s kinda done. With all the tradesmen and cabinetry, these things can’t be moved around and altered easily!

So here it is, a sneak peek at my kitchen, there’s more to come soon, but I just couldn’t wait to share my cooker with you all and a few tips and tricks I’ve learnt along the way! A huge thank you to AO, Matalan, Amara, Harvey Jones and all the tradesmen who helped us get this far! 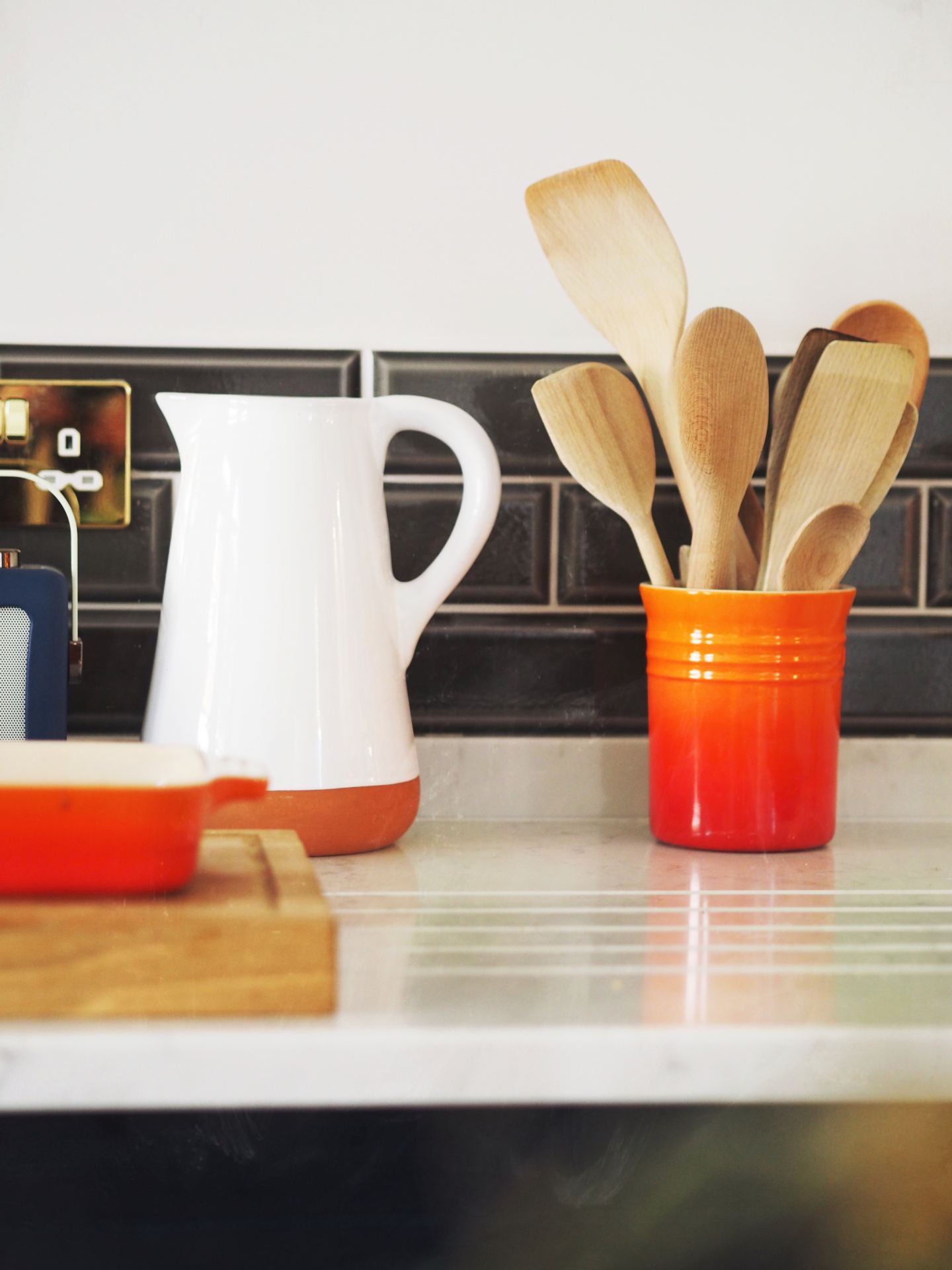 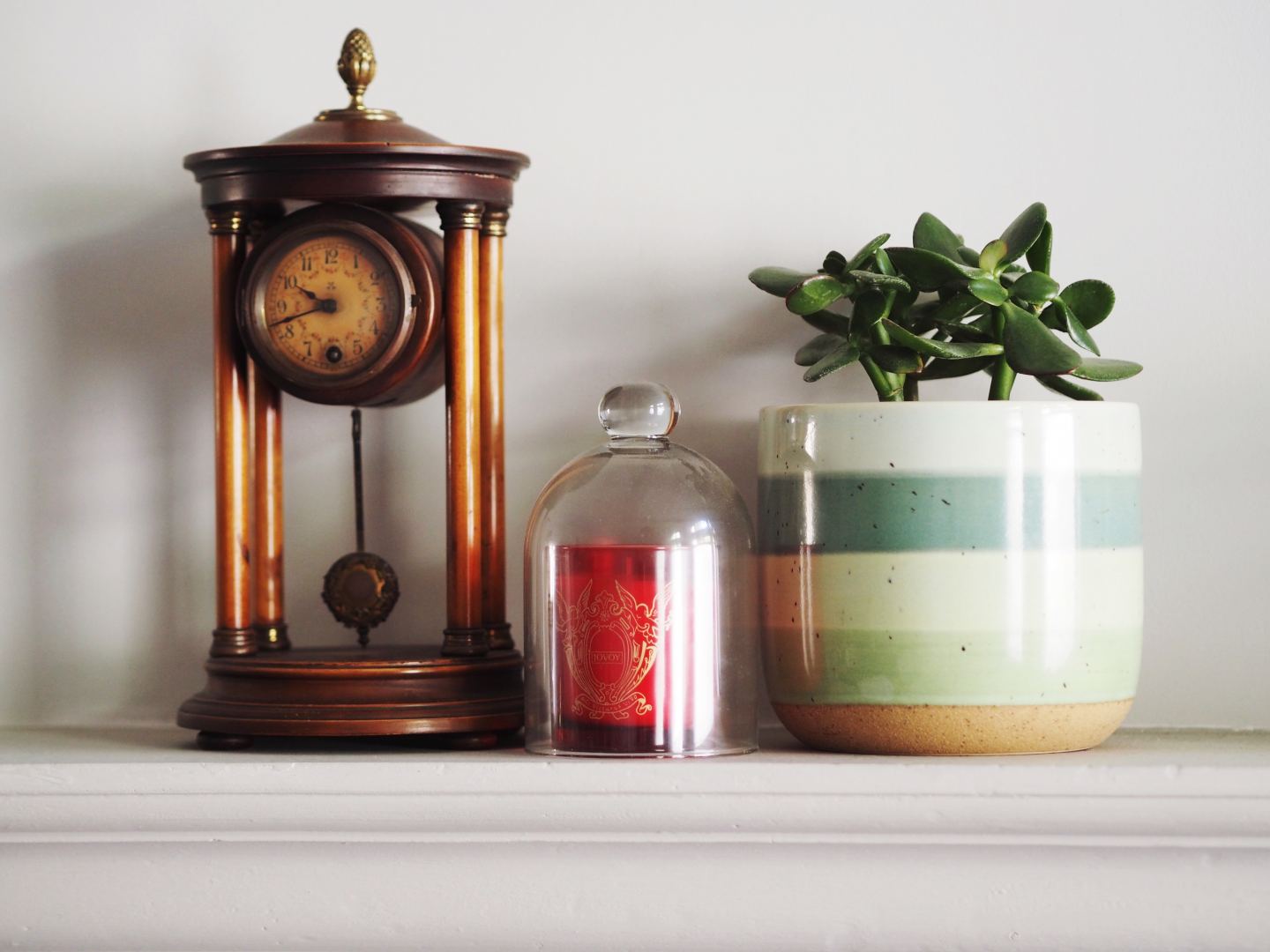 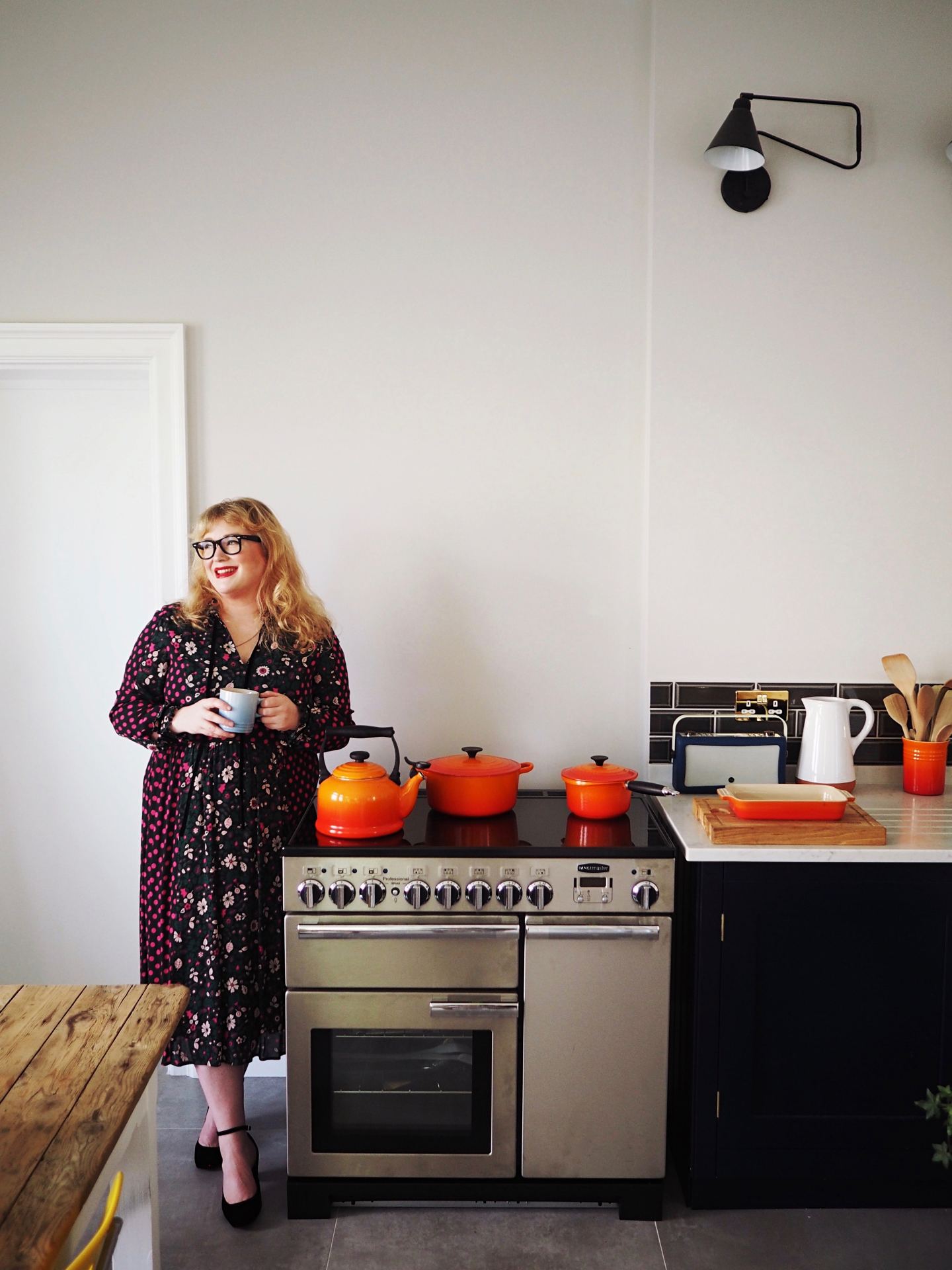